The 5º Solidarity March in favor of CEE Raquel Payá, more supportive than ever thanks to our collaborators

Countdown to the celebration, tomorrow Sunday, of the 5º Solidarity March Dénia.com in favor of CEE Raquel Payá. An appointment already consolidated in the sports-solidarity calendar of the region that would be very difficult to carry out without two fundamental pillars: those enrolled in the two modalities, soul of this test, and the companies that collaborate year after year in the organization of the same

La 5º Solidarity March in favor of CEE Raquel Payá is organized by Dénia.com and Xàbia.com with the collaboration of Conchip, registration platform and logistics of the test; the one of the City council of Dénia, Local Police, Civil Protection and Red Cross, that during the morning of Sunday they will collaborate with the organization so that everything goes to perfection.

One more year, the local company Trest He has been in charge of the design of the image of the solidarity march, and we have counted on the support of the colleagues of Radio Dénia in the diffusion of the same to his listeners.

In addition, Portal de la Marina he has taken charge of the preparation of the numbers, and will donate, one year more, one euro for each one registered in the test. The company Alehop has given us the bags that will be delivered to the participants at the end of the test, while The Nau d'Orozco collaborates by donating the fruit that will be distributed at the end of the tour. On the other hand, Aluvent will take care of the bottles of water that will be distributed among the participants.

Also noteworthy is the collaboration of Marina Health Hospital, which provides a doctor during the day with the Red Cross ambulance.

Finally, we can not forget the numerous companies that collaborate by providing the gifts that will be raffled at the end of the test, a list that you can consult here. And neither of those companies that have wanted to collaborate contributing financial donations to the account number enabled by the organization.

To all the people who, in one way or another are going to collaborate with the cause this Sunday ... THANK YOU! 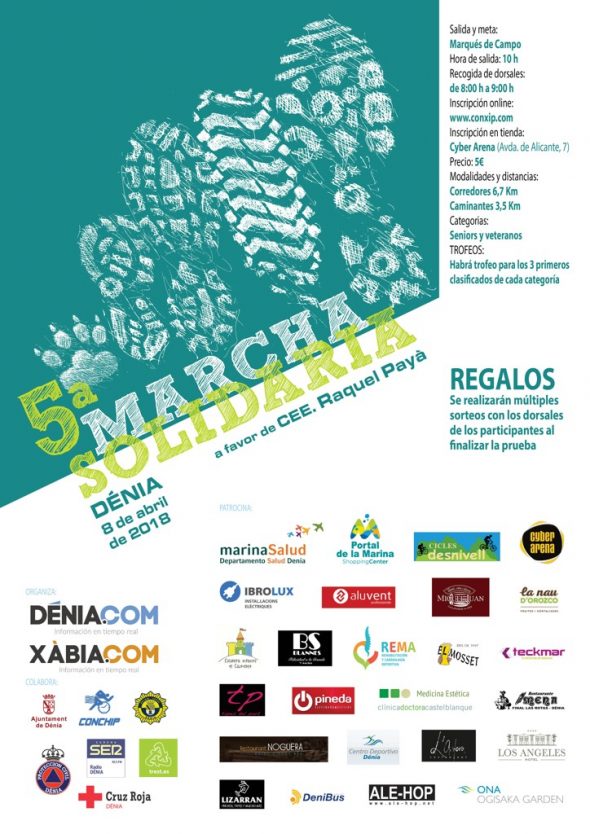