Grimalt defends the decision to prevent us from advancing to Phase 2, understanding that "united we are stronger"

The decision of the Ministry of Health of not asking for advancement to Phase 2 of the ten departments that they will complete and after 2 weeks, period agreed for the new evaluations, has brought a great controversy among the residents and entrepreneurs of the Marina Alta. Of course, silence has reigned among politicians these days.

The region is located in one of the departments that the Generalitat has sacrificed in order to pass all by the hand. Barceló was shielding himself yesterday in that two of the ten departments had slightly worsened their numbers of infections, but he did not say anything about the other eight, among which is that of Dénia, which continue to improve every day.

Today the mayor has finally positioned himself on the decision of Minister Barceló on his social networks. On your Facebook profile, Vicent Grimalt has admitted that "our health area is affected by the decision", but at the same time understands the decision of the Govern since "We have more guarantees of keeping the virus under control if the three provinces act as a territorial unit". This last statement has been criticized by neighbors in the same publication since the Marina Alta has a lower rate of infection than most departments. "And if next week Valencia or Alicante do not pass what will be done?", you can read in one of these comments. 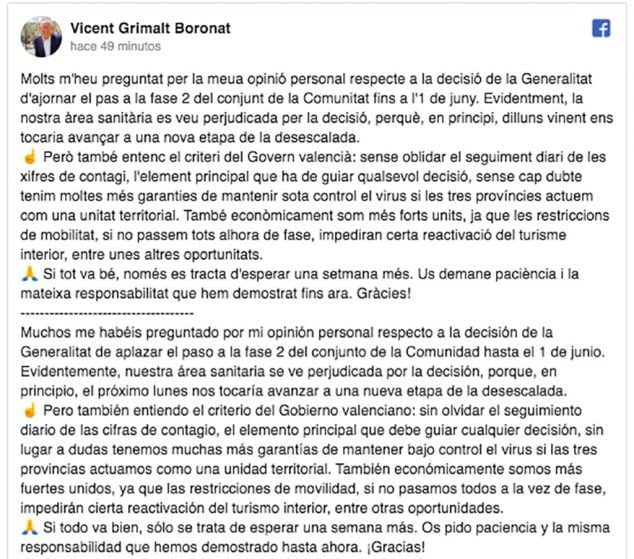 Grimalt publication in defense of the decision of the Govern

In addition, Grimalt defends that being able to move within the province will help the economic revival. However, from AEHTMA they declared to this medium how much it hurts the Marina Alta hospitality not to be able to open its interiors, as well as those trips that would really bring them economic relief are from the Valencian province, its main client, and not so much from Alicante.