The Mayor of Dénia, Vicent Grimalt, He appeared before the neighbors on Wednesday afternoon in a Facebook live, as every week, to answer their doubts. As was the case last week, most revolved around new restrictions and, above all, relief measures during de-escalation. 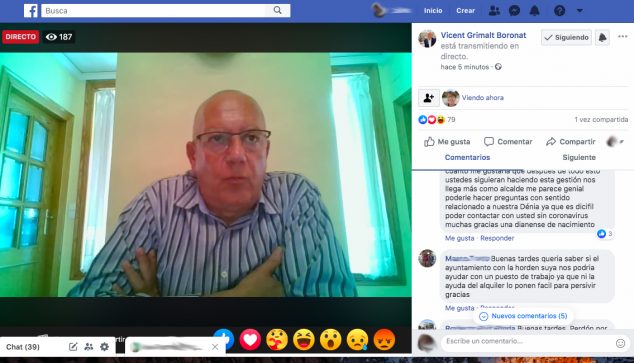 Many athletes insist on asking why some practices are allowed and others are not, and how the first ones can be carried out. But, undoubtedly, questions have reigned over the opening of bars and restaurants.

How was announced last week, the City Council is studying together with the technicians and AEHTMA the arrangement of the terraces of the bars so that they have more facilities to open during Phase 1. One of the options being considered is to expand the occupation space of each one of these to ensure the safety distance between the 50% of tables that are allowed to be placed.

In addition, yesterday the City Council made public its intention to pedestrianize several areas of Dénia to favor the walk of the neighbors without overcrowding, as well as to lighten the "borders" of the terraces. However, Grimalt has insisted that "pedestrianizing is not done with the excuse of removing chairs and tables", but so that there can be a relative normality without breaking the safety distances.

Now, in the direct of this Wednesday from the mayor, we have learned thanks to the question of a person who also raise to study if it would be possible to allow to make a provisional terrace for small bars that do not currently have one. Now, provided that the location of this place allows it and that it does not block the free movement of pedestrians. But, for the moment, there is nothing official about it.