The City Council of Dénia is working on the measures to reorder the public space to adapt it to the rules of social distancing and the so-called new normality that we will be achieving in the successive phases of de-escalation that have started this week. 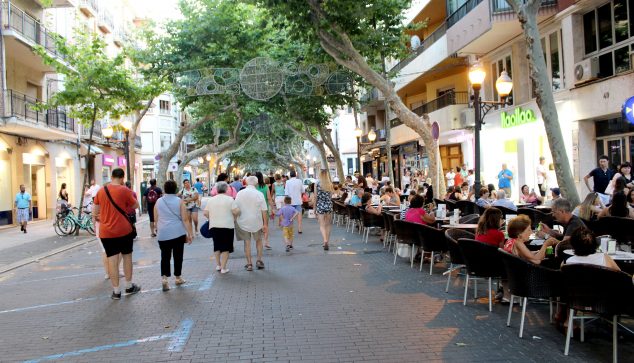 The departments of Territory and Citizen Protection work in coordination to establish these measures, combining two objectives. On the one hand, guaranteeing the safety of citizens, seeking sufficient spaces to travel through the city while maintaining distance, and on the other, helping the hospitality and commerce sector to adapt and face the new situation.

Yesterday, Monday, a new meeting was held with Aehtma, this time on the street, with the assistance of councilors and municipal technicians, to study the possibilities of occupation of public roads by the locals, who can take 50% of the total of tables that are allowed and have to comply with the distance measurements, leaving at least 2 meters of separation between tables. It must be remembered that these establishments will resume activity from next Monday, the start date scheduled for the start of Phase 1 of the de-escalation.

The City Council has established that both the premises associated with Aehtma and those that are not have to present to the consistory its proposal for the arrangement of the terrace, with information on the location, plan of tables and chairs and distances. The City Council will study each proposal and, if it complies with the regulations, will approve it.

At the moment, as announced by the Councilor for Territory, Maria Josep Ripoll, from next Monday the Marqués de Campo street will be closed to traffic because the terraces can be mounted on the road with the required distances and sufficient space is guaranteed for that people can walk and access shops without risk.

Ripoll affirms, and has also expressed it in the interdepartmental commission held today with the assistance of the spokesmen of the municipal groups, members of the government team and technical personnel of the city council, that the city needs "spaces for the safe movement of people" and, therefore, in areas where there are many bars and restaurants, "we have to pedestrianize if they want to mount terraces".

This measure adopted for Campo street will also be studied for other areas with hospitality and commercial activities such as Calle del Mar, Glorieta or Quevedo.

In other areas with enough space, such as Calle de Magallanes, some squares in Baix la Mar, Ramón y Cajal or Plaza del Convento, a rearrangement of the terraces will be carried out to guarantee distance.

Other streets of the city, such as Loreto or the Paseo del Saladar, have space limitations that will allow only some locals to take advantage of specific spaces.

At the same time, the City Council is working on the reorganization of the public space to expand the pedestrian space and guarantee the security and social distance measures established by law and which are 2 meters between people.

The idea is to apply certain temporary measures, such as widening sidewalks and prioritizing pedestrian crossings in those most conflictive points due to the volume of human traffic. The expansion of the space on the sidewalks will materialize with temporary elements such as fences, new jerseys, paint or cones. Traffic calming measures are also contemplated, reducing speed in some streets, the change from battery parking to lane mode in others and possible pedestrianisations will be studied.