The Provincial Deputy for Infrastructure Javier Gutiérrez visited Dénia this morning to find out the status of the projects subsidized by the Provincial Council accompanied by the mayor, Vicent Grimalt, and by the councilors of the Municipal Citizens Group in the City of Dénia, Susana Mut and Estefanía Swchamb. The deputy has expressed his will to “Reaching out to speed up the execution of two large-scale works in great demand for the transformation they may bring to transform two emblematic spaces of the city: Glorieta of the Valencià Country and its surroundings and the Calle Marques de Campo". 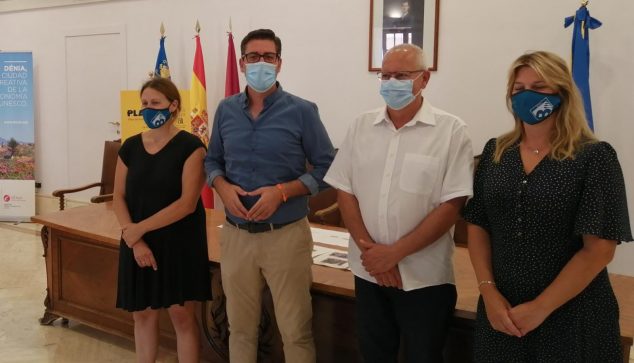 Javier Gutiérrez with the mayor and the mayor of Ciudadanos Dénia

Both projects come after several months of conversations between the government team of the Dénia City Council and the municipal group of Citizens, who have worked so that the Dénia will not be punished again in terms of infrastructure subsidies.

The spokesperson for the Municipal Citizens Group, Susana Mut has indicated that "From Ciudadanos we could not allow Dénia to be left out of the most important investment item of the Alicante Provincial Council, as usual, and for this reason we have worked together with the government team so that this will not happen and for This is what we will bring to plenary next Friday for approval, the redevelopment projects for the Pabellón del País Valencià and its surroundings, and the improvement of the road on Marqués de Campo street and the replacement of luminaires with LED technology ".

The first redevelopment project of the Glorieta del País Valencià and its surroundings, with a global budget of 967.429,26 euros, will focus on the redefinition of this area and its integration with the Plaza del Ayuntamiento. The performance includes works on Cop, Ramón y Cajal and Carreró de Morant streets from the street Cop to Calle Mayor.

The second work to improve the pavement of Marques de Campo street and its surroundings, the substitution of luminaires with LED technology, aims to solve the problem of paving and improve safety for drivers and pedestrians with a total investment of 330.309.28 euros.

Estefanía Swchamb has insisted that "Citizens has come to the political scene to improve people's lives, and if by coordinating with our provincial deputy Javier Gutiérrez, we get the County Council to treat Dénia as he deserves, we will. The current situation is for all of us to work together, and to get out of the continuous tension in which some want to convert politics ”.

Once the meeting at the City Council of Dénia has ended, they have visited the area where the performances will take place, as well as the work that the Alicante Provincial Council is carrying out in Camí de Sant Joan and that of Plaza Valgamediós and Pare Pere, which will begin soon.