The Dénia Foundation held last Friday, at the Royal Yacht Club of Dénia, the ninth edition of its 100x100 awards, which annually reward different projects in the areas of society, culture and sports. This year, in addition, with the novelty of an extraordinary prize for the preservation of the environment and nature. 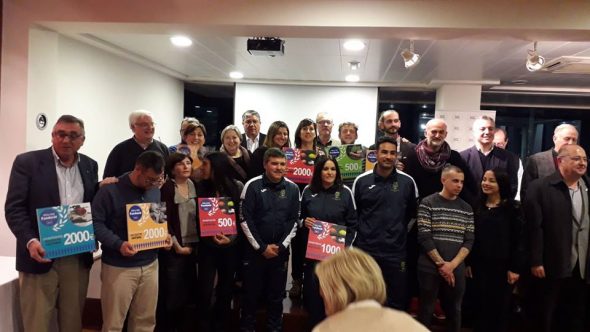 The authors of the projects had 5 minutes to expose them. For their part, the patrons of the foundation, who had received the 100 contribution euros, had the right to vote for the best projects.

In the cultural area the first prize was for the project 150 anys de ball i music at Marina Alta presented by Paco Carrió, for which 2.000 euros took. The second prize, and the corresponding 1.000 euros, was for the Delpera del Pare Pere presented by Francesc Esteve; and the third prize, endowed with 500 euros, for the Concerts Cicle of the Esperança Coronada association.

The project Without Barriers, the Club de Tenis Dénia, was the winner in sports sectionFollowed by Female team presented by Dénia base football (1.000 euros), and Sport & Co, by Laura Bixquert and Pura Higueras, who took the 500 euros from the third prize.

In the new environmental section the project was recognized Reinforcement of autochthonous fauna against pests in agricultural fields in Jesús Pobre de Magic & Nature with 1.000 euros; and to Projecte audiovisual Posidònia presented by the Associació Observació i Estudi del Mar Obesmar with 500 euros.

Classrooms for the Elderly will resume classes in October with a capacity reduction in half
August 11st, 2020
Leave your comments