Health investigates 62 cases of people irregularly vaccinated against the coronavirus, including 10 public officials

The Minister for Universal Health and Public Health, Ana Barceló, has reported on the processing of proceedings and, where appropriate, the opening of information files to 10 public officials, which are part of a total of 233 cases whose vaccination has been analyzed for not apparently adjusting to the corresponding risk groups. 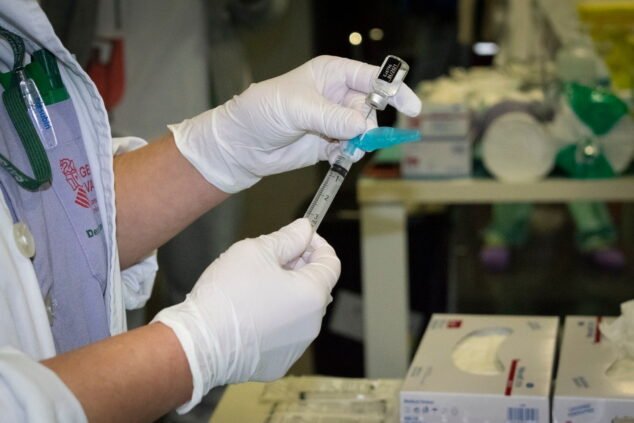 Vaccination in the health department of Dénia

"Of all of them - Barceló has specified - a total of 171 cases are justified by having administered the first dose of reconstituted vaccines to people, either from the following group or from justified risk groups". "As for the 62 remaining cases, they are the ones that have been investigated in more detail to clarify, where appropriate, responsibilities", highlighted the head of Health.

Barceló has specified that it ordered, both the General Directorate of Human Resources and Public Health, the opening of information files to find out, in the first case, if any professional from the Ministry had committed an irregularity and, on the other, if they had been vaccinated people not belonging to the groups that corresponded to them and if, if applicable, there was any cause that justified this vaccination

According to Barceló, from the information collected so far, it appears that "irregularities may have been committed" and, "given the importance of this matter and for the sake of transparency," he has advanced some details "at the expense of substantiating several of the files that are still open. "

Likewise, the head of Health has detailed that, from the General Directorate of Human Resources of the Conselleria, at this moment there are 9 information files open, including those that are already in the phase of preliminary proceedings or those in which an extension has been requested of information. "All of them affect our own personnel who may have been involved in the vaccination process and, since they are in process, are subject to the corresponding privacy and data protection," Barceló pointed out.

Regarding these 62 people who have received the vaccine without corresponding, the head of Valencian Health has also referred to the conditions in which the events have occurred in the cases of 10 public officials that, "due to their special relevance and significance, considered of general interest ", has specified Ana Barceló.

In the case of Ximo Coll Moll, mayor of El Verger, and Carolina Vives Bolufer, mayor of Els Poblets, the two were vaccinated together on January 8 at the El Verger Health Center by the center's staff, and it is open file of preliminary proceedings.

As for the Cristina Morera, at that time councilor for Social Services and Health of Dénia, and some of her relatives, was vaccinated on January 12 at the Santa Llucía residence and a file of preliminary proceedings is open.

Regarding Jose Luis Cuesta Merino, at that time the chief prosecutor of Castellón, he was vaccinated at the health center on October 9, on January 29, preliminary proceedings were initiated by Human Resources. Those responsible for vaccination are the Primary Care Nursing Coordinator and a nurse. And the file of preliminary proceedings is open.

For his part, Luis Rubio, mayor of Villahermosa del Río, and who, as mayor, is also the administrator of the municipal residence, is vaccinated at the municipal residence, as he alleges, because he was on the list of workers and residents provided by the residence and authorized by Public Health, where it is included. An information file is open at the Castellón Health Department.

As for Francisco López López, mayor of Rafelbunyol, the vaccination took place on the day of the start of the campaign in the first residence of the Valencian Community where the vaccine was administered, which is why the mayor was invited and administered a dose left over at the end of the day. The file is filed by Human Resources. In this line, Barceló has highlighted that it has learned this Tuesday of the Valencia Public Health report, where it is alleged that there was no protocol. In this regard, the councilor has requested the general director of Public Health to provide her with information on the content of a report of which, as she has indicated, she has not been aware.

In the case of Bernabé Cano, mayor of La Nucía and provincial deputy, he is vaccinated on January 6 at the Savia La Nucía Residence. It is presented together with the Councilor for Health at the residence, without having authorization to do so and, therefore, not complying with the protocol provided in the social health centers, and without appearing on the vaccination lists. And, despite the above, he is vaccinated by the staff of the residence. The file of preliminary proceedings is open.

Regarding José Galiana, Orihuela Councilor for Health, he was vaccinated on January 6 at the Las Espeñetas residence. The file of preliminary proceedings is open.

As for Juan Bautista Roselló, provincial deputy responsible for the Doctor Esquerdo Mental Health Center, he was vaccinated on January 12 at the same center as he was included in the list of workers and residents provided by the Provincial Council for vaccination. Being included in the list, the file is filed by Human Resources.

Finally, in the case of Àngel Ribés Bellés. Mayor of Benlloc (Castelló Health Department), the circumstances in which the vaccination has occurred are being investigated when this person appears on the list provided by Public Health.

Processing of proceedings and, where appropriate, opening of files

With regard to these people, the head of Health has reported that "Public Health has been requested to immediately process the proceedings and, where appropriate, to open the corresponding files to limit the facts, circumstances and subjects responsible for each case", as well as the application, if applicable, of the sanctions contained in the General Law 33/2001 of Public Health and Law 10/2014 of the Generalitat of Health of the Valencian Community.

Ana Barceló has highlighted that "possible irregularities, 62, when more than 149.000 vaccines are worn, 0,041%, do not in any case tarnish a vaccination process that is proceeding with the most absolute normality".

Regarding the supply or not of the second dose of the vaccine to these people, the Health Minister recalled that he ordered that "they should not be supplied while a final decision is made, assessing the medical significance that the decision may have, if it is that it does, and taking into account the position of the Valencian Community Bioethics Committee, who was consulted ".

In this sense, the health officer has reported that the Committee has transferred to his department its first conclusions in which it indicates that "the administration of this second dose to these people should only be considered after the vaccination of the groups collected has been completed. in the vaccination strategy. The recommendation is, in any case, to vaccinate 6 weeks after the first dose, which, according to the Committee's report, is the maximum term set by the WHO for the second dose of the Pfizer vaccine. "

According to Barceló, the Committee also recommends in its report "that sanction or disciplinary measures be taken that, administratively and politically correspond, and that it will analyze the case in greater depth at its next plenary session."