The number of people affiliated to Social Security in the Marina Alta in the second quarter of the year was 53.261, this means that the system registered 764 workers registered more than at the end of May (increase of 1,46% ). Summer has always been linked to high occupancy rates or at least it has been traditionally until the coronavirus crisis has disrupted our entire reality. Despite the state of full return to activity and with the hope that it causes employment in these summer months, unemployment in the region has increased again by 148 people in June compared to the previous month (1,11% in percentage terms) ). Social Security has gained affiliates, a good figure, although less than in previous years (you have to go back to June 2016 to know a registry of affiliates in a lower second quarter -1.771 less-). 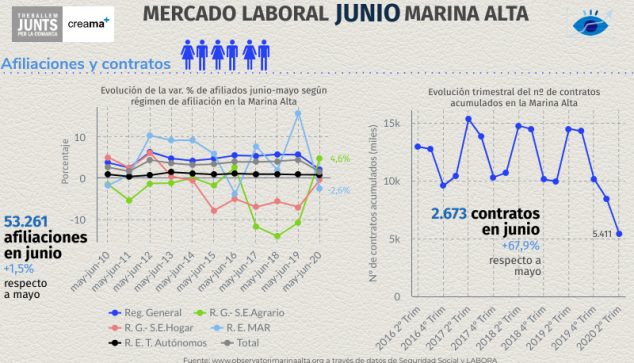 Labor market of June 2020 in the Marina Alta

June has ended with 1.364 more members than the previous quarter (2,63% more) and 4.723 less members than June 2019 (8,15% less). The percentage of affiliates is similar to that of May (1,46% more), a temporary indicator of the stabilization of the labor situation. In this increase in employment compared to last month, we highlight the little decrease in affiliates in the General Regime of the Special System for Household Employees (-0,49% compared to May) when this affiliate regime tended to decrease between 5% and 7% -the exceptional situation requires more workers to provide services for the family home. The increase in employment in the Agrarian Regime system is also notable (an increase of 4,63% compared to May) when the dynamics in this Special affiliation System has been a decrease in the number of affiliates in the June-May monthly payment. The General Scheme and the Special Scheme for Self-Employed Workers have increased compared to last month, although as mentioned, this increase is the smallest that has occurred in recent years. The most affected sector are those affiliated to the Regime of the Sea since they decrease by 2,60% compared to the previous month, when this decrease did not occur in the last 5 years.

The effects of the pandemic are still very present in the labor market. Unemployment has risen in June, 148 new unemployed, something very atypical in a month traditionally good for employment. Unemployment also shows some stabilization, the rise of these 148 unemployed in June leaves the final figure of 13.491, however, it is a much smaller rise than those of March and April and even that May when the rebound had already been contained, we must Keep in mind that these figures are conditioned by the Temporary Employment Regulation Files (ERTE) and the aid to the self-employed who have cushioned a much greater collapse. It should be noted that the year-on-year variation in June had not reached an increase in unemployment of this magnitude, but rather the opposite, showing negative variations in unemployment figures between June (now the increase is 46,42 , 2019% compared to June 1,11). Similarly, the variation in the number of unemployed between June and May has always been negative, with the exception of this monthly variation in unemployment, which was XNUMX%. 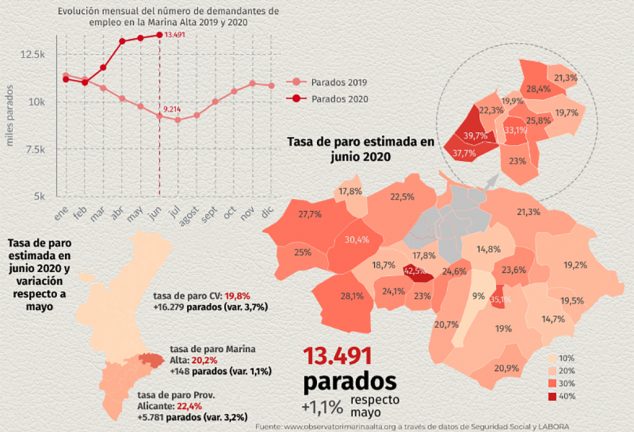 Unemployed in the Marina Alta in June 2020

Construction together with Industry repeats a decrease in the number of unemployed compared to the previous month in the region (decrease from April to May and from May to June) and it is the Services sector that now shows the greatest loss of unemployed, but the three sectors Favorable employment have been insufficient to offset this rise in unemployment.

On the other hand, the number of ERTEs resolved by LABORA in the Marina Alta reached 3.005 as of June, which have affected 12.658 workers. Of the total of resolved cases, 88,35% corresponds to the Services sector, 2.655 ERTE for 10.988 workers, followed by Construction with 201 ERTE for 817 employees, Industry occupies the third position with 112 files for 728 workers and, finally, Agriculture with 37 ERTE for 125 workers.

Hiring has increased in the Marina Alta by 67,9% compared to May, these occur largely in the service sector, which represents about 80% of the total hiring, 6,5% monopolizes it the industrial and agriculture sector has decreased its hiring by 125 and construction by 62. Therefore, of the 1.081 hirings that have been made more than the previous month (2.673 new hires), 949 are absorbed by the service sector, it has also been seen an improvement in the industrial sector with a total of 173 hires, 72 more than last month. On the contrary, contracting in construction has been reduced by 15,5% and the sector most affected, agriculture, this decrease of 125 contracting represents a decrease of 88,7% compared to May.