The theater returns to Flexio Verbale

The days 19, 20, 25, 26 and 27 August in the Plaza Mariana Pineda will take place sixteenth edition of the Verbal Flexio. This is explained by the Councilor for Youth, Isabel Gallego, along with the representatives of the Flexió Verbal association who presented the posters and part of the festival's program this morning. A participatory, altruistic and creative initiative where all kinds of artistic and spontaneous proposals have room.

Dénia will turn those five days into an open-air auditorium where you can enjoy, for free, art in its purest form. This cultural exhibition is subsidized from the profits obtained from the association's merchandising sales, as well as from participatory events such as dinners and raffles. Besides, the Department of Youth offer the stage where you can make all performances. 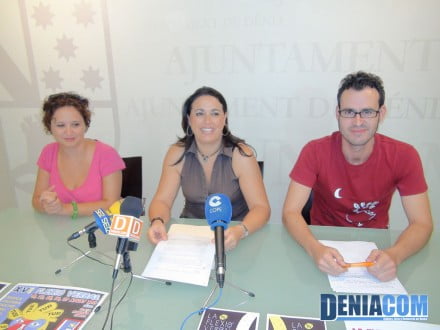 As a novelty compared to the previous year, the theater is resumed with seven plays by local companies and from outside the Dianense territory. The demand for musical groups to perform has also increased considerably.

The program will therefore be composed of these two arts more dance, painting, magic, short and lots of exhibits that make up a series of cultural events. In late September, the last day, separated from the rest of the poster will be closed, with rock concert en the Mistelera. The program, which is being finalized to make, is available on the Verbal web Flexio.

To contact the organization and obtain more information, the email is laflexioverbal@gmail.com.