The Alicante Civil Guard has investigated 17 people in the region of La Marina Alta (Alicante) and La Safor (Valencia) as alleged perpetrators of 17 crimes of forgery of private documents and 18 crimes of reception. The falsification and the reception are related to 113 agrarian documents, linked to 72 tons of oranges. 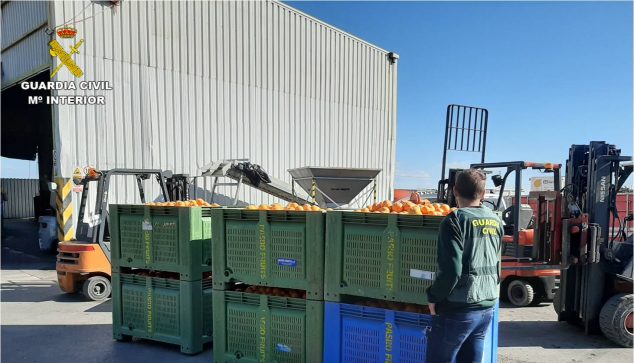 Calp's ROCA Team has carried out "Operation trace 3.0" in which a total of 17 people have been charged with the alleged crimes of forgery of private document and reception. They are 13 men and 4 women, of Spanish, Moroccan and Romanian nationalities, related to the falsification of 113 agricultural traceability documents (DATA).

One of the tasks carried out by the ROCA Teams of the Civil Guard (Anti-Theft Team in the Field) are inspections in agricultural warehouses to check the documentation and origin of the products. For this reason, last June 2019, coinciding with the orange harvesting campaign, they began a thorough job of classifying and studying thousands of DATA documents, in citrus purchasing warehouses in the Marina Alta regions ( Alicante) and La Safor (Valencia).

This DATA document (Agricultural Accompaniment and Traceability Document) is intended to know the origin and final destination of the product and includes data on: owner, land, transporters / gatherers, quantity, destination, date of collection and signature. In addition, it is mandatory for each item that exceeds 20 kilos (provided that the owner does not carry it).

From the study of these documents, the agents detected 113 that had certain features of having been falsified. The most common cases could be classified into four:
- Owners of farms that had not given authorization for the collection and, therefore, had not prepared any DATA, but there were several documents supposedly issued by them (sometimes more than 30).
- Owners who had given a single authorization, corresponding to a single DATA, but many others were found in their name.
- Owners who had signed several authorizations, however, the documents showed varieties that they did not cultivate, different dates from those of the authorizations or land that was not theirs.
- Fictitious owners, that is, people who do not exist but who signed the documents.

What's more, the researchers discovered a plot between certain crews, who transferred data from the landowners among themselves, in order to make the false documents to their needs.
This operation has culminated with 17 people investigated (13 men and 4 women), during the months of January and March of this year 2020, as alleged authors of 17 crimes of falsification of private document and 18 crimes of reception, related to 113 agrarian documents . It is suspected that with these documents they would have passed more than 72 tons of orange as of lawful origin, when they really came from criminal acts.

It should be noted that, thanks to this intense investigation by the ROCA Team at Calp, it has been possible to reduce significantly the criminal acts that have occurred against the patrimony during the citrus campaign, so far this season, and criminal activity has decreased, in this area, in more than 50%, in relation to the two previous years.

Importance of the farmer's complaint
The fact that a large part of the fruit belongs to the striae fruit and that, sometimes, the amount of stolen orange does not cause too much economic damage, makes some of the victims decide not to report it. This factor makes the work of the Civil Guard even more difficult when it comes to investigating this type of crime that occurs in the field, so it is emphasized that any fact should be reported, however irrelevant it may be, on the part of of the affected.