This year the anniversary of Casal 25 met the fails CenterThe Casal del Tio Pep. Therefore, the Commission held the first talks with Title "At the center of the Center, dinem and parlem de falles". 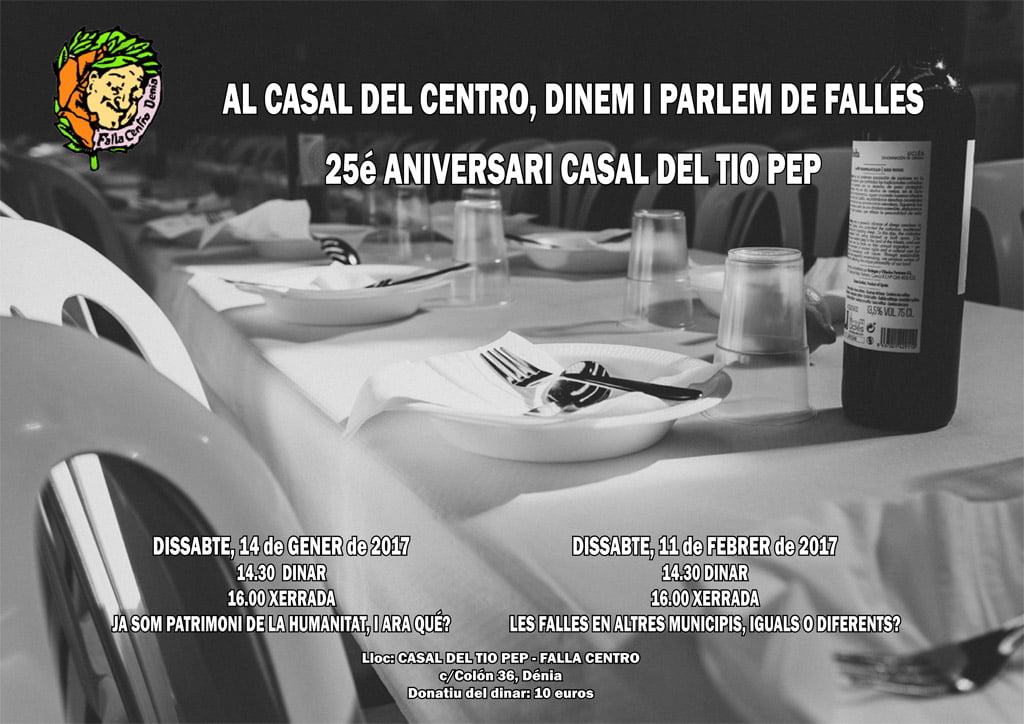 At the end, at the 16: 00 hours the talk will take place "Ja som patrimoni de la humanitat i ara què?"Where the importance of this award will be treated for failures and what are the main objectives and challenges recognition as this entails.

For it will participate in the talk, Ivan Esbrí, ethnologist and historian, and a member of ADEF (Association of Falleros Studies), an entity reference in the world of failures in Valencia for his work in many cultural initiatives, in which some of their member took part in drafting the dossier submitted to Unesco for the award. Also with the participation of Ramón Estelles, President of the Falla Pere-Joan XXIII Cabanes and coordinator of the magazine Cendra.

By the local participating Luis Silvestre, Creative Director of Grup Melic, a business group specializing in tourism products, to discuss the possibilities to explore thanks to the recognition of faults as a World Heritage Site; and Manolo Catalán, fallero Center and member of CEF, Col.lectiu d'Estudis Fallers de Dénia and the Marina Alta, who will explain what the task for the party failures Dénia get the recognition that today have other cities with the same fallero origin.

The second of the talks will be the next day 11 for February where it is talk about "Do you fail them in altre municipis, the same or different?"Where reputed falleros municipalities as Alzira, Gandia, Torrent, Sagunto and Burriana are counted as failures in their localities.