The Department of Ecological Transition of the City of Dénia launches the program 'Sucs a l'escola' course 2019 / 2020 in the educational centers of Dénia, the Xara and Jesús Pobre. It is an innovative initiative to promote local agri-food production, healthy food for the school environment and sustainable gastronomy. 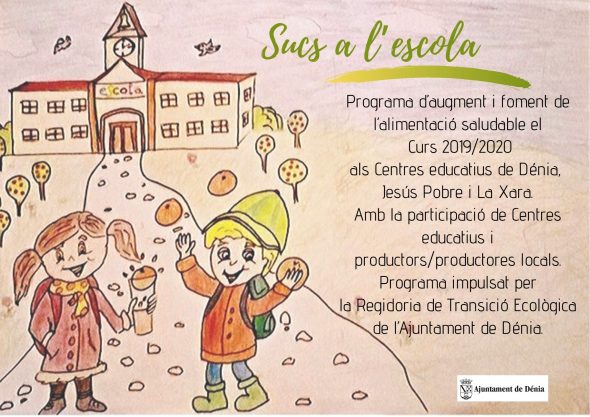 The dynamics of the initiative consists in the elaboration of natural juices for the students in the educational centers made with organic cultivation oranges or zero waste grown by local farmers and farmers. To obtain the juices, the City Council will transfer a juicer machine of municipal property, which every week will be transferred to the center where the activity takes place. Dénia City Council will also provide 125 kilograms of orange from local producers to each participating center.

The students of the CEE Raquel Payá have a special implication in the program, since they will actively participate in the development by attending the first day of the campaign in each educational center to carry out some catering or catering activity related to orange.

Behavior and eating habits that influence food preferences are acquired gradually from early childhood. As a final result, the configuration of eating habits that will mark, in adulthood, preferences and definitive aversions is obtained. These habits will influence not only the current state of health, but they will be promoters of health or the risk of becoming ill at later stages of life.

Therefore, the Department of Ecological Transition has wanted to promote this initiative among the school population with the main objectives of promoting the consumption of natural juices from fruit grown in the area as a better alternative to the consumption of other foods with lower quality nutritional; value local agri-food products, as a way to promote the health of girls and boys and promote healthy consumption; and promote agricultural diversity, recognizing the origin and varieties.

The benefit of the program, therefore, is multiple, according to the Councilor for Ecological Transition, Maite Pérez Conejero. On the one hand, students consume more local food and learn about healthy eating habits and, in addition, “The agri-food sector of Dénia, the Xara, Jesús Pobre and the Marina Alta is promoted".