The Fallas 2014 are already a reality. On Saturday night, and after the opening of the exhibition of Ninot in the Center d'Art L'EstacioHundreds of falleros and falleras gathered in the Halls El Poblet to celebrate the Gala Sopar in which the rewards were delivered Local Board Fallera and Central Board Fallera and was recognized falleros copies of this year, José Vicente Benavente and Vicent Ivars.

Vicent Ivars, the commission Baix la Mar, thanked in a simple and emotional speech the support of their families and people who have worked with him hard on the fault. He also had special words for his niece, Anna Sobrecases, with whom he shared his year as president of the failure 2010.

Anna was precisely guide you in charge of a few words to his uncle in a very special for him, in which failures Dénia decided to recognize one of the top titles of the Fallas in Dénia night.

José Vicente Benavente, meanwhile, agreed in his speech of his family but also his commission, Falla West, and of the Fallera Local Board, in which 8 has been working for years in favor of the failures. It was his daughter Cristina who was in charge of addressing him on behalf of all his friends and family.

President of Local Board Fallera, Jaume BertomeuHe did a little speech in which he lamented the lack of support of legislative institutions in the year that banned holding bingos in Fallas, one of the traditional forms of funding failures.

He also congratulated the Falleros copies and Ramon de Colomo, in charge of the opening of the Fallas 2014.

After dinner, falleros and falleras shared a night out at the facilities of the rooms. 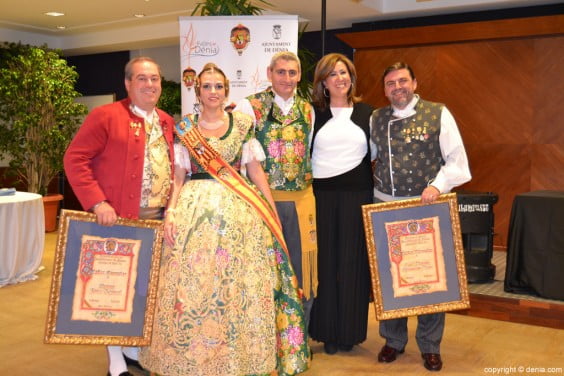