Grimalt: "The only thing that is clear to us is that the parties will not be like those of other years"

The Mayor of Dénia, Vicent Grimalt, has again appeared before the neighbors live on Facebook to answer all the doubts of the Dianenses. One of the earliest, again, has been about local festivals. 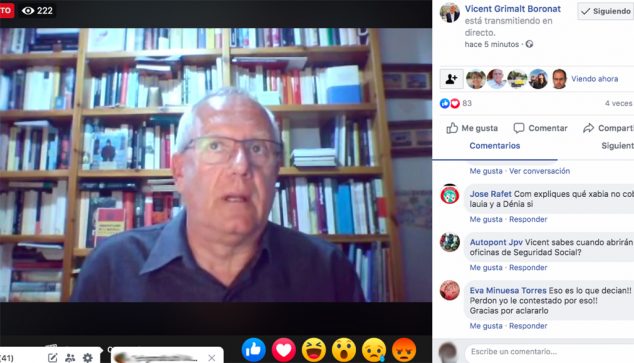 There are municipalities that have already delayed many upcoming events on the calendar for the Dénia festivities, but it is also true that other very large ones arranged for this month have been postponed to July in the hope that they can be held then. So there is still too much in the air.

This uncertainty has encouraged the City Council, as Grimalt has answered the question, to wait a few more weeks until a decision is made. Similarly, the Councilor for Fiestas, Óscar Mengual, has responded that they are waiting to see how the decree of the state of alarm evolves. "We want to be prudent and until the measures and deadlines to get out of the crisis are more accurately known, we cannot advance anything", declared Mengual, announcing that they would be prepared for any scenario that arises.

What seems certain is that it will not be an ordinary party. At the moment, they are going to lose two very valuable months to prepare the previous organization, especially notable in the case of the floats that, without having been able to celebrate their fallas festival commissions, have not been able to start any of their proposals that will hardly arrive on time.

To this must be added the possibility that control measures still exist to avoid large concentrations of people. Without forgetting the possible effects that resentment of the economy may have on Dianense tourism.

Different parties, as the mayor assumes, stating that "The parties will not be like last year or 2021", although these can finally be held on their date.