The latest update on the incidence of coronavirus by municipalities that the Ministry of Health has made public has been a hard blow for the Marina Alta region, and especially for Dénia. 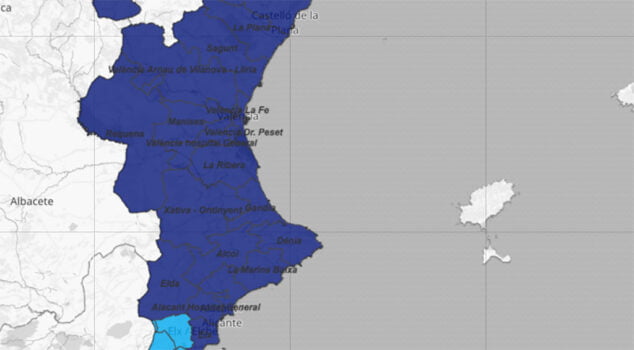 Current situation of the coronavirus by department

The municipality is in the worst scenario since the COVID-19 pandemic began, with each new update breaking its own records that already seemed insurmountable. And these come to us alarming figures Knowing that it can get worse.

We are facing the first consequences of Christmas, but there are still many weeks ahead to see how far these infections that occurred during days with harsh restriction measures are going to affect.

Restrictions have been increased again, reducing capacity and further limiting travel and leisure time. In some cases, it has even been chosen confinement of municipalities, preventing the entry and exit of these. It is about 29 towns in the Valencian Community that have been closed since last January 7 and will remain so for 14 days, when their situation is reviewed and it is decided whether to extend this confinement or to allow displacements again.

What is striking is that many of these municipalities have much lower numbers of new infections and incidence, the standard unit with which they are based to decide most of the measures, than Dénia, which does not enter the block of municipalities confined. In fact, the current situation means that the capital of the Marina Alta is in increasingly worse conditions and is very bad when compared with the inmates.

Without going any further, if we compare Dénia with a similar and nearby municipality such as Oliva, we see that the first has almost triple incidence than the Valencian population. Currently Dénia has a cumulative incidence of 1.133,61 infections per 100.000 inhabitants, while that of Oliva is 490'02.

But, in addition, if we compare Dénia with each of the municipalities we see that their situation is worse than half of them. The locality has more incidence than 15 of the confined towns.

Despite the fact that the resolution of January 5, 2021 with which Sanitat confined the 29 municipalities makes explicit reference to the accumulated incidence, the Ministry itself has confirmed to this medium that the epidemiological reports take into account many other variables and how they are interrelated each.

"In general terms, indicators come into play such as the expected cases; the observed ones; the probability of observing that number of cases or greater; the diagnostic increase; the degree of traceability of the cases; the active outbreaks; the average number of cases per outbreak ... ", they report from the Ministry of Health.

Comparison of the incidence of confined municipalities and that of Dénia