The month of December brings the magic of Christmas to Dénia. For this reason, an endless number of Christmas events and parties are held in the city to commemorate the dates. The capital of the Marina Alta is decked out with decoration and lighting for the event, which concludes with the expected arrival of the Wise Men. The City Council of Dénia, every year, celebrates Christmas in style, creating an extensive program so that families can enjoy full dates. This usually starts with the Nit de la Llum and conclude with the cavalcade of the Magi. However, it is made up of a huge range of events, such as concerts, cinema and workshops, with which it is impossible to leave anyone indifferent. With the exception of traditional days like New Year's Eve and Three Kings, the rest of the events lack an exact date, so each year a different day is decided to adapt them to the particularities of each calendar.

It is an important commercial action to promote purchases in local shops in the city in the days before Christmas. The Nit de la Llum It is a night in which Dénia is filled with candles and shops open until midnight offering discounts and offers to buyers. It does not have an exact date, but the usual thing is that it is celebrated to welcome Christmas, so it would be the appointment with which the Christmas programming.

Throughout the night, different local groups and associations liven up shopping with Christmas carols and popular songs in the busiest places, as well as shows and dances. The goal is for people to shop at local businesses and help promote them. A very pleasant atmosphere is generated and it is a consolidated initiative that has been repeated for several years, except for 2020 due to the coronavirus pandemic. Access the link to all the information about the Night of the Llum.

In the week of Christmas, Dénia receives one of the most anticipated visits. Santa Claus arrives and is accompanied by the Calle Marques de Campo towards the basement of the Town Hall, where the boys and girls of the city have the opportunity to ask for your gifts and to take a picture with him. Access the link to all the information about the parade Santa Claus in Dénia.

The city's venues offer a multitude of proposals to celebrate New Year's Eve with dinner, party favors and an after party. In addition, for a few years, these proposals have been joined by a public event with the party in Glorieta with orchestra or DJs. However, in 2022 it was moved to La Via street due to works in the area. Access through the link to all the information of the New Year's Eve in Dénia.

Cavalcade of the Magi and Royal Postmen

The parade is one of the most important and massive events, bringing together thousands of families along the entire route so that the little ones can see the Three Wise Men up close, as well as the numerous entertainment proposals that accompany them. In addition, for a few years his arrival at the town hall has become a huge spectacle with dances, light shows and music that, after the royal speech, concludes with a castle of Fires. Animation during the parade of the Magi

Access the link to all the information about the parade of the Three Kings of Dénia. The Three Wise Men walk through Diana Street during the pandemic 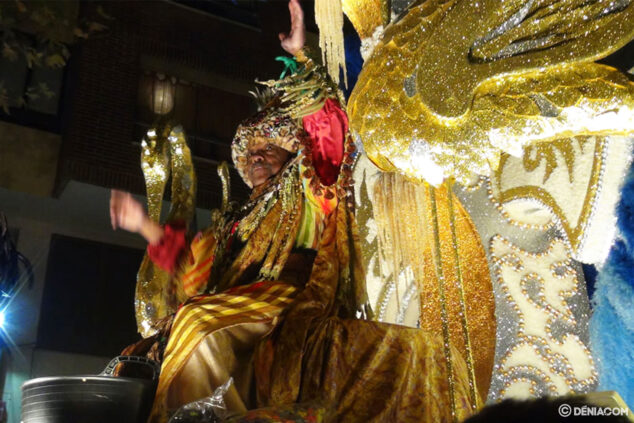 Santa Claus welcomes the little ones Melchior waving from the float The Magi are received under the town hall The Three Wise Men on the balconies of the town hall Delivery of letters to Santa Claus Improvised parade of the Magi in 2020 37.861
4.455
12.913
2.480
We use cookies necessary for navigation and traffic analysis. We do not use cookies that provide us with personal data or advertising cookies.
More optionsACCEPT
Manage consents