CEDMA, Rotary, Red Cross and Fundació Dénia raise 6000 euros for those affected by the humanitarian crisis in Ukraine

The dinner organized last week by CEDMA, Rotary Clubs of the Marina Alta, the Red Cross and the Dénia Foundation, have managed to raise a total of 6089,86 euros, which will be used for various projects aimed at alleviating the humanitarian crisis caused by the armed conflict that continues today in Ukraine. 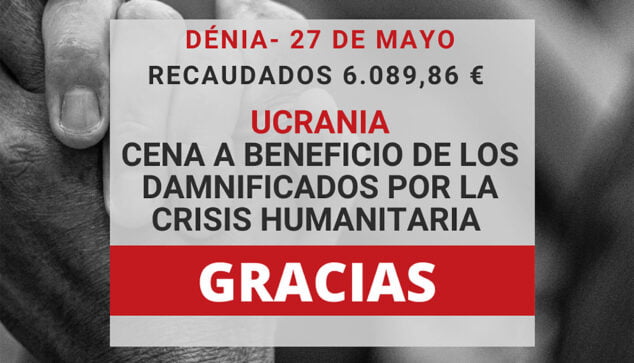 A total of 214 people attended this event held in the halls of the Dénia Marriott Hotel and which had the support of Banc Sabadell, Dénia.com, LaMarinaAlta.com, Las Provincias, Canfali Marina Alta, Radio Dénia Ser, Cope Dénia, La Marina Plaza and Deniadigital, to whom the organizers have thanked all the support shown, as well as to all those present and to those who contributed funds through row 0.

Numerous companies, businesses and hotel and restaurant establishments in the Marina Alta contributed gifts and vouchers that were raffled off during the evening, which managed to increase the night's collection.

The money will be transferred today in equal parts to the Red Cross and the Rotary Club, which will be the entities in charge of managing the projects from now on.

Dénia approves, once again, the PGE, but with serious doubts: "It is the legal framework we need"
November 25th 2022