Agents of the National Police Station in the town of Dénia have arrested a 41-year-old woman while trying to make a fraudulent transfer by phone, posing as the legitimate bank account holder. 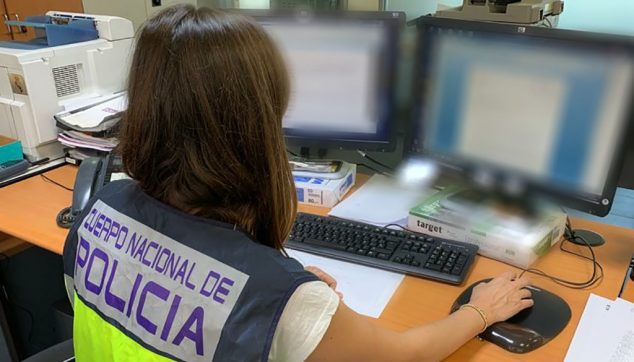 Photograph of technological crimes of the National Police

The detainee, allegedly made a call to a Dénia bank branch posing as another person, providing the DNI number and complete affiliation data requesting to make a transfer of 700 euros to an account. The bank employee verified the data but refused to carry out the operation, so the alleged scammer told her that she urgently needed the money and that they would provide her with a code to withdraw the amount from an ATM.

At the insistence of such a person, the branch employee carried out further verification tasks and realized that the information provided was that of a well-known habitual client, when she informed the applicant that she did not recognize her voice and was not going to perform any operation the person on the other end of the phone cut the communication.

Later, he made this fact known to the bank's client, who made the corresponding complaint at the Dénia National Police Station.

The agents of the Judicial Police Brigade took over the investigation and quickly managed to identify the alleged author of the scam, being located and detained.

The detainee was charged with the crimes of usurpation of marital status and fraud and was placed at the disposal of the Investigative Court of Dénia.

The National Police also warns of possible technological frauds that try to reach the recipient by the method called "phising", consisting of the massive sending of emails supposedly from official organizations such as the Labor Inspection or Social Security, in which A non-existent investigation is reported to the company, which in its case has received the email, hinting in the body of the message to the special situation in which we find ourselves at the moment.

Cyber ​​criminals use the logo of the Labor and Social Security Inspectorate to give an appearance of veracity and use an email address in the message header, which may lead a non-expert user to think that the email comes from an official body .

The fake email from the official body incorporates a link that, if opened, downloads a file called "ransomware", which is a type of malicious malware that allows blocking or restricting access to certain parts or specific files of an operating system and basically prevents that you can continue to use that computer, all with the aim of requesting a ransom, a reward or any other economic consideration, to give access to the system again. The promise of return of the control of the system, in case of yielding to blackmail, is not fulfilled or supposes to receive new ransom requests. The current "ransoware" campaign detected by the National Police comes from email accounts with the domain @ itss.se, @ itss.es and @ itss.app.

"A new time begins for this pandemic": vaccinations begin at the Dénia Hospital
08 January 2021

The Department of Health of Dénia adopts new measures, given the new epidemiological situation
08 January 2021

The incidence of the coronavirus in Dénia soars with the latest update, with more than 730 cases per 100.000 inhabitants
08 January 2021

How has confinement affected the use and abuse of drugs ?: the new course of UNED Dénia
08 January 2021