Training and dissemination of classical dance, main objectives of the association.

The Pas de Quatre Association Amics de la Dansa is constituted in the 2006 year by the teacher Mª Ángeles Signes and a group of mothers and fathers interested in the formation, dissemination and promotion of classical dance, as well as in organizing courses taught by high-level professionals in Dénia. Pas de Quatre has more than a hundred members and the privilege of having the prestigious dancer and teacher Anna Maria Pakvis Cverina as a member of honor. 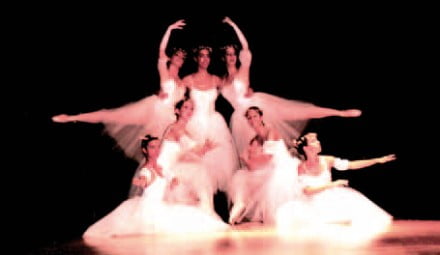 MªÁngeles Signes is the teacher and choreographer of the association and teaches about 80 ballet girls aged between 4 and 17 years. Pas de Quatre organizes every year a festival weekend course and participate in events and activities promoted by different institutions and cultural entities: the Mostra de Dansa and Children's Song Festival in the cycle Family Activities in Flexio Verbale at meetings of dance Gerard Collins Foundation Alcàsser (Valencia), local holidays in different municipalities, parades Moors and ChristiansIn joint performances with musicians such as the Youth Band of Pedreguer ...

Speaking of side information that promotes partnership, MªÁngeles Signes explains that "we try to organize a course for every summer, but it is difficult and expensive to bring good teachers". On the other hand, in the last two years they have also organized trips to attend ballet performances such as output organized Oliva to see the Imperial Russian Ballet, and Alicante to attend the representation of the company José Martínez, star dancer Paris Opera.

The repertoire of the dancers of the association is very broad, since it includes everything from modern choreographies of rock (music by Elton John and Queen, among others), or neo-classical (music by Yanni, Mertens, Cirque du Soleil, Theodorakis, Mike Oldfield, Ennio Morricone ...) to the most classic, choreographed by MªÁngeles Signes and even with original choreography by Marius Petipa and other great classical choreographers.

On the concerns of the association, Corinne Darques, president of Pas de Quatre, conveys you would like classical dance was more supported institutionally, since Dénia has no conservatory of dance and young people who want to access a superior training they have to move to other cities. In this regard, they consider the creation of a Municipal School of Dance could be a great opportunity for all young people interested in the world of dance. In his opinion, this center could coexist perfectly with existing private schools in the city and the Municipal School of Dance could go in the future, a ballet that will enrich the cultural offer of Dénia.
On the website of the association -www.pasdequatre.com- you can get more detailed information about the entity, enjoy a complete photo gallery of the different actions and know the important professional projection are getting some of the students of MªÁngeles Signes.