A total of 181 people of all ages have participated in the nine outputs that, since last October, have been carried out within the framework of the programming of Family Excursions.

This year they have visited places of Dénia and the surroundings as the Mediterranean Garden of the Albarda, the monumental trees, the Montgó Natural Park, the irrigated and dry farming landscape, the rocky and sandy coastline and the Riurau de Jesús Pobre agricultural market. 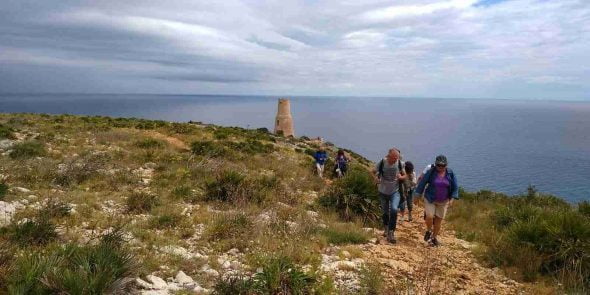 As a novelty, the program has included a route along the path from Castell de Castells to Pla de Petracos and also the visit to the Serra Gelada Natural Park by the Faro del Albir route.

Family Excursions ended last Sunday with an exit through the Torre del Gerro, Les Planes and the port of Xàbia.

Since the end of the Routes, the participants climbed the Torre del Gerro, to continue the route through the Plains, where they could contemplate the evolution of the forest after the fire of September 2014 and the contrast with the unburned forest. After passing through the Molinos de la Plana, they had lunch in the recreational area and went down to the port of Jávea to return to Dénia by boat while contemplating the cliffs of Cape San Antonio.

The Greenway of Dénia: how to get there, route and photos
29 November 2020

Routes through the Montgó from Dénia: trails for all levels
27 September 2020
Leave a comment

36.652
4.282
11.046
2.130
We use cookies necessary for navigation and traffic analysis. We do not use cookies that provide us with personal data or advertising cookies.
More optionsACCEPT
Manage consents