Cadet assembly Paidos Dénia managed to beat the Alicante Promises, by 0 to 2 in the match that was ahead of the weekend. With this victory, the Dianenses team takes the lead in the classification with 54 points, five more than its closest rival. In the absence of four days of league this was one of the complicated games that remained for playing the team that runs Raúl Gil.

The schoolboys went to the track Alicante with the idea of ​​sentencing the game the faster the better. That is why they printed a strong rhythm of play and soon came the first work of Pau.

A goal that did not fall well in the local team, as it caused some confusion and this was used by the dianenses to score the second through Álex, when they were only five minutes into the game.

From that moment, the Promises Alicante began to play better, moved the ball and above all could get out of the pressure to which he submitted the Paidos Dénia. The locals raised the intensity in their game and showed a game in some moments more aggressive. Despite this, the boys of Raúl Gil, knew how to temper the spirits of the locals 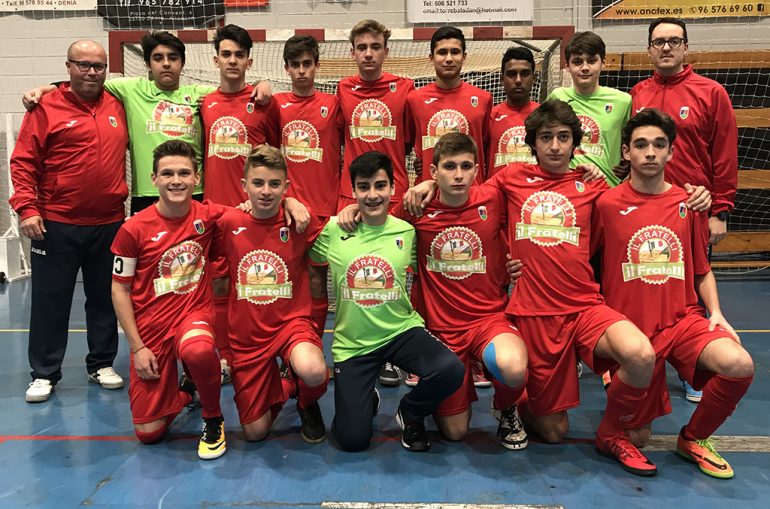 Control of the Paidos Dénia game

In the second half, the game continued under the same dynamic as in the first half, dominance of the ball of the visitors before a local team that sought more push than play the goal of his rival.

The tightness of the scoreboard caused the excitement to reach the end as at any time any of the 2 teams could score, the visiting goalkeeper Vicent, was very good and neutralized the few local occasions with solvency.

At the end of the regulation time it was arrived with the triumph of the schoolboys by 0 to 2. The next match for Paidos Dénia, will be on Saturday 24 against the Torres de San Vicente, in the municipal pavilion of Dénia. During Holy Week the team will prepare for what will be the game of the year, against the New Elda FS, in the penultimate day of the league.