The Dianense gymnast, Laura Crespo Piera has got the bronze medal in the Championship of Spain of Rhythmic Gymnastics in the junior category held in Valladolid.

Laura Crespo has won the prize by climbing the podium in an absolute level championship in the general classification in junior category. This has been possible thanks to his sacrifice, effort, determination and above all work that he has shared with his coaches, Montse and Chus Soria.

The Dianense was third in Aro and Ball, seventh on tape and 12ª in Mazas. He has achieved what she most wanted to climb the podium, next to two large national gymnasts as they are, Mónica Alonso District III and Marsha Avila Club Girls. These athletes are participating in international tournaments.

Furthermore he managed to qualify in the final three devices getting the bronze in Aro, fourth in ball and was fifth in Film. Along with Denisse Portolés Club Lliria team it was fourth. They also won the bronze medal in the classification Communities.

Beside her, two other dianenses gymnasts participated in this national championship. Gal.la Gallo in appliances ball, hoop and clubs, the latter obtaining in sixth place which allowed him to reach the final, qualifying in eighth place.

Marta Burzio He competed in hoop and hands free, achieving a fifth in the latter mode. The two teamed in this category, being in seventh place. 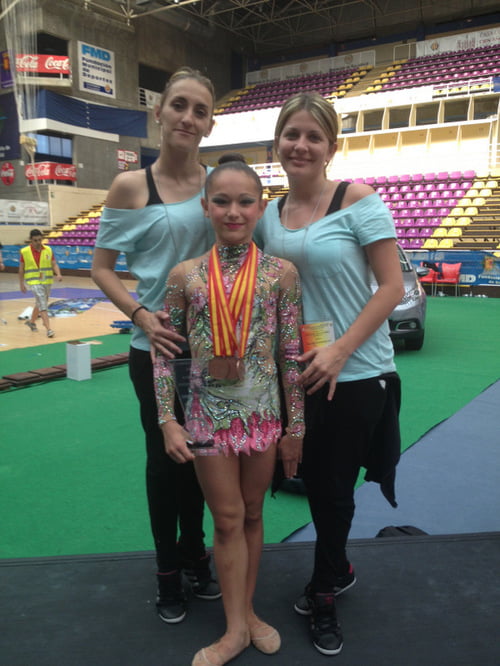