This week the Rum Route began, the solo ocean crossing, considered the most important in the world, with a route of 3.542 nautical miles (6.363 km) between Saint Maló (France) and Pointe a Pitre (Guadeloupe). On this occasion, the Spanish sailor, Alex Pella, will participate in the regatta, but doing a very different job than he is used to. Together with Lalou Rocayrol, director of the “Arkema” team, they will carry out the route for Quentin Vlaminck, who will sail alone aboard the “Arkema”. The test has brought together 138 boats from 14 countries. During the first days, the Ocean 50 “Arkema” leads the regatta. 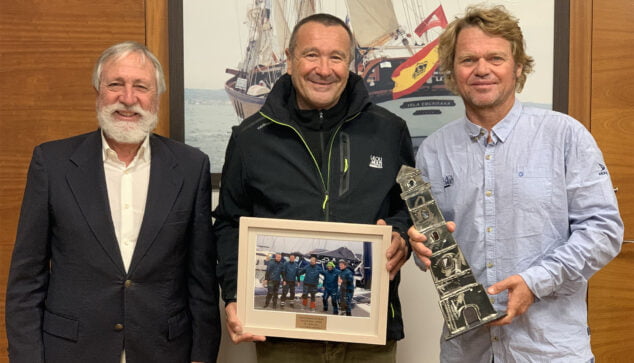 Presentation of the trophy in Marina de Denia

«Our job is to choose the best trajectory, according to the analysis of the weather and the rest of the participating boats. It is a job that has great responsibility since you have to make quick decisions. Routing is only allowed in the classes of boats that sail very fast, that is, multihulls, to help skippers who go solo and, thus, only have to be aware of the navigation and not so much of the work of card table," says Alex Pella.

The “Arkema” team is back in Marina Dénia, after their passage in May, when they managed to break the Ibiza-Dénia record, aboard the Arkema trimaran, in a time of 2 hours, 14 minutes and 44 seconds. Until Quentin Vlaminck arrives in Guadeloupe, Alex and Lalou will work on board the "Galvana", in Marina Dénia, where they have installed the base of operations. «Linking Dénia with ocean sailing is a dream that we already fulfilled a few months ago and that we are now going to repeat. We always say that Dénia must be a benchmark for Spanish sailing and nautical”, says Gabriel Martínez, captain-director of Marina Dénia.

In 2014, Alex Pella made history by becoming the first Spaniard to win the Rum Route, breaking the Class 40 crossing record, with 16 days, 17 hours, 47 minutes and 8 seconds. «What surprised me the most about this regatta was the influx of such a beastly public that gathered in Saint Maló. I remember that there were 90.000 people at the Cape Fréhel buoy and it is something unique in ocean sailing. As a result of achieving this challenge, very interesting projects arose. I have given Quentin some advice, go out and enjoy yourself, he knows the boat perfectly and is a great ocean racer».

During Lalou Rocayrol's stay in Dénia, the captain-director of Marina Denia, Gabriel Martínez, presented him with a plaque and a trophy in recognition of the Ibiza-Dénia record, which they have held since last May. The trophy is a lighthouse made by the sculptor Toni Marí.

37.861
4.448
12.913
2.470
We use cookies necessary for navigation and traffic analysis. We do not use cookies that provide us with personal data or advertising cookies.
More optionsACCEPT
Manage consents