Referee: Lluna Olarte, aided in the bands by Carbonell Leal and Robles García. He admonished local Jon, Oscar, Floro and Benji. He was sent off for double warning to visiting coach Guillermo Santos. 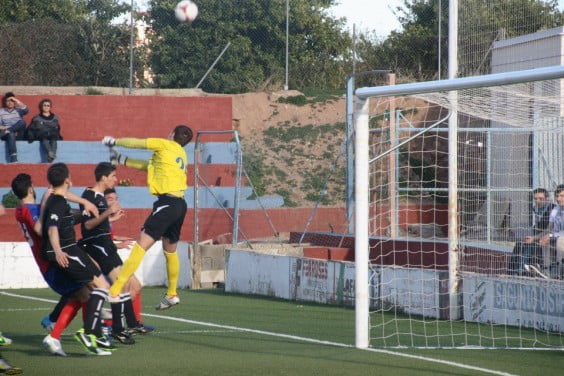 The Dénia remains on the edge of the abyss after their draw in Catarroja to two goals. And it could be much worse, he was about to fall to a bottomless cliff as he came to rest by losing 2 to 0.

The nerves were especially noticeable in the men who formed the defensive line. Many mistakes were made, lack of success in the deliveries, relaxation in the marks and this was used very well by a much quieter Catarroja.

The fact that the Valencians no longer played anything, made them much more relaxed on the lawn. In the 24 minute, Gozalbo overtook the hosts with a corner kick. Once again, Dénia conceded a goal on a set piece.

The goal evidenced many more nerves in the players that he directs Guillermo Santosjuanes. The thing became very complicated when the edge of the break, the second came so much for the blanquiazules. Jordi marked the second and left very touched to the Dianense expedition.

In the second half, the changes introduced by the Dianense mister were noticed. The presence of Gervasio and Roberto allowed to order more the game of Dénia. In the third minute, Mono with a head shot shortened the differences and made dreaming of the comeback.

The Catarroja continued faithful to its scheme and had some arrival with danger on the goal of Celso. Dénia equalized with a goal from Roberto that seemed to be the way of the triumph of his team. The Dénia wanted but could not and it was Sergio Floro who had the last chance for the Catarroja, but Celso stopped.

At the end of the clash a tie to two, which is of no use to Dénia seeing as Steel increases its lead in four points.
The four remaining days for the final of the league seem very difficult for a Dénia forced to win in all to save the category.