Defeat of CFS Mar Dénia in its displacement to Elda

The lack of success and the little continuity in the game weigh down the Dianense team. Hoping to achieve something positive, CFS Mar Dénia traveled to Elda to face CD Nueva Elda B, but the reality was very different. As soon as the local team started, they surprised the Dianenses and in a long ball the 1-0 arrived.

After the initial blow, the Jaén players settled down on the field and the first chances began to arrive, but sometimes due to a lack of success and others due to the great performance of the local goalkeeper, the minutes passed and the break was reached with the 1-0 result. 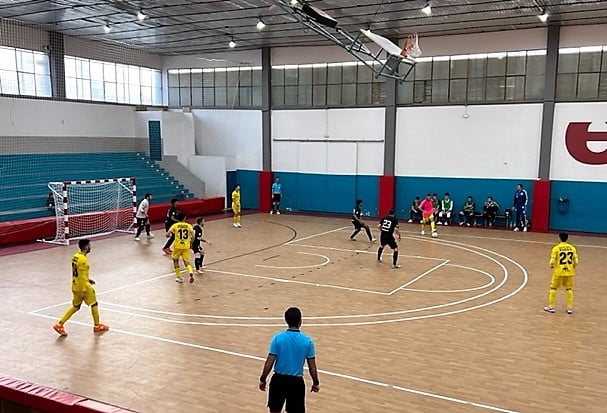 Defeat of CFS Mar Dénia in its displacement to Elda

The feeling was of impotence, but due to the shortness of the result, there was still hope for the second half. As soon as the Mar Dénia began, it went out looking for a tie and forced the local team to a strong physical wear and tear, which cost them that in the 27th minute they saw how the fifth foul was signaled to them, although once again it was not determinant, given that the arbitral couple did not point out any more and not because there were no situations to do so. Thrown into the local goal without scoring in the 28th minute after a counterattack, it was 2-0 for the locals.

The game turned into a monologue and it was the Dianense team who had the best chances while Elda's team with a strong defense based their game on quick counterattacks against the goal defended by Roque. In the absence of 4 minutes, the Dianense coach put a player on the court goalkeeper to try to change the dynamic, but it seemed a bit late, although in the 39th minute Rober managed to score 2-1 and in the next play when he again tried to attack the rival goal, was the subject of a clear foul that would have led to the launch of a double penalty, but that the refereeing couple did not point out and the offender kept the ball and alone in front of the goal, achieving the final 3-1 with which the match ended.

Next week the Dianense team will receive CFS Futsal IBI at the Municipal Sports Center of Dénia, second in the general fight for leadership, a match corresponding to the 25th day, which will occasionally be played on Sunday at 13:00 p.m. that on Saturday with the feast of the failures it is impossible.