Today there has been another small vegetation fire in the Camí de Pego area with the Camí de l'Assagador del Palmar de Dénia. According to the Alicante Provincial Firefighters Consortium, the fire started on a terrace and the total number of meters burned was 1200. 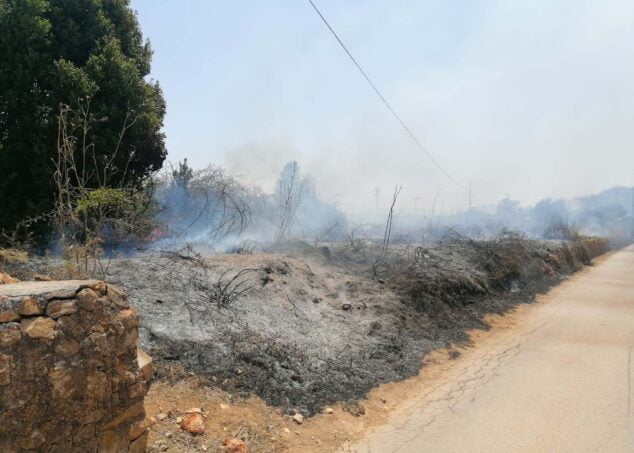 Part of the burned field in Dénia

This small incident took place very close to the fire that also occurred in the Camí de l'Assagador del Palmar on the afternoon of Friday, July 22. Finally, both fires have already been considered extinguished, although there are still firefighters refreshing the affected area today.

Finally, the Fire Department has also reported another small outbreak of fire on Camí Merle. Apparently this had been in a storage room, although finally the flames have not gone further as they have been suffocated by the neighbors' own means.

As reported, the risk of fire is currently high and incidents follow each other. For this reason, the Emergency Coordination Center of the Generalitat announced this morning that, following the guidelines of the Special Plan against forest fires (PEIF), preventive surveillance flights have been scheduled through the high and extreme risk areas of the Comunitat Valenciana, as is the case of the Marina Alta.

The Marina Alta will say goodbye to the summer with a long yellow alert: is a cold drop waiting for us?
21th September 2022

What are the sandy beaches of Dénia?
21th September 2022