Balance of the first year of government: “We do not sell smoke; we make decisions and act within our means ”

Mayor, Vicent Grimalt, accompanied by the councilmen and councilors of the government team, has taken stock of the first year of the 2019-2023 legislature; a year, he pointed out, "very complicated", in which the DANA of September 2019 has been experienced, the Gloria storm of January of this year and, currently, the health, economic and social crisis derived from COVID-19. Acts "That have marked a year of much work, responsibility and, especially, the implementation of public policies of a social and progressive nature that characterize this government team". Grimalt has stated that in these twelve months “We have never stopped following the roadmap that we set ourselves and, precisely, having a roadmap has allowed us to manage the unforeseen events that have arisen”. 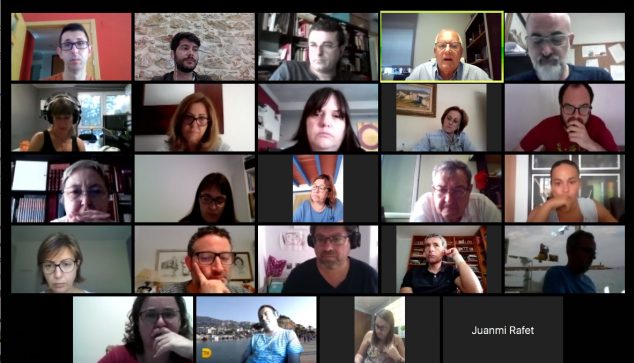 This roadmap is included in the 23 points of the 2019-2023 government program available on the website of the Dénia City Council and which, as of today, attaches a section on the degree of compliance with each of the points "In a further exercise of accountability of our government action to citizens".

The main actions of the program launched or completed in this first year are, in the area of ​​improvement of the city and its public spaces, the work of widening sidewalks to the San Juan road, between Joan Fuster avenue and the roundabout, started last week; and the next tender for the redevelopment works on Mayor and Pare Pere streets and Plaza del Oeste.

The removal of the architectural barrier of the train track is another of the projects that we will see start this year. The mayor has indicated that the Dénia-Gata Tram works will begin in September, with two ambassadors and two new roundabouts accessing the center from the Montgó area.

The municipal government has also launched the I Municipal Occupation Plan for 2020 to meet the new needs derived from COVID-19 and the transition to the new normality. 300.000 euros have been allocated and the hiring of 22 people residing in Dénia until December 31, 2020 has been allocated.

In terms of mobility, in this first year of government, a good part of the land of the old miniature golf of Les Rotes to create a public car park that avoids the massive access of traffic to the area at the end of Les Rotes. Currently, Grimalt recalled, Dénia has about 3.000 public parking spaces on the outskirts. In these months, the personal mobility ordinance has also been approved and, shortly, the specifications of the urban public transport service will be tendered.

The city's educational infrastructures are also being renovated and improved through the Building Plan of the Generalitat Valenciana. The plenary this June will accept the delegation of powers for the construction of new facilities for the Raquel Payá special education school on the land where the municipal nurseries were located, with a budget of more than 6 million euros. The works at the Vessanes school are underway and will end in the summer and those at the Llebeig school, which were suspended, will surely resume in the coming months. The works at the Pou de la Muntanya finished at the end of 2019 and the children's classroom project is under supervision. As for the project of works in the IES Historiador Chabás, it has already been favorably informed by the city council and is pending a tender and, in the case of the IES Maria Ibars, the project is being drafted. The new school in La Xara is under construction and with respect to Pare Pere de Jesús Pobre, the Dianense city council is awaiting the request for delegation of powers by the Department of Education.

Regarding the improvement and modernization plan of the sports center and the adjacent facilities, the mayor has affirmed that the reconstruction of the covered pavilion devastated by the DANA in September will begin in July and recalled that in this year's budget there is an item for the drafting of the project for a new pavilion. These months have also begun the remodeling works of the athletics track and the works for the change of grass of the Diego Mena soccer field have been awarded.

In the cultural field, a remodeling of the spaces of the House of Culture has begun, aimed at the creation of the Castejón Space, the new offices of the Department of Culture and a study room in the old premises of the Public Library and the reopening of the children's library in the space it occupied on the ground floor of the building.

In terms of gender violence, the sheltered housing for battered women that the city council gave in to the Generalitat is already working. Half of the space of the old dependencies of the Official School of Languages ​​has also been given in the autonomous government to locate the gender violence court and related services.

Other projects listed by the mayor, and which can be followed on the municipal website, are, in tourism, the advance in the elaboration of a Strategic Plan for a smart tourist destination, also the establishment of the bases for Dénia to become a smart city ; the reactivation of the Youth Council and the creation of the Children's Council; or the 25% increase in the budget line of participatory budgets and the change in the dynamics of participation because it was easier for citizens.