Vent, Pols i Pua encourages young people to know the Rondalla and sign up.

La Rondalla Vent, Pols i Pua is one of the most traditional musical groups of Dénia. Throughout his career, the Rondalla has been honored with numerous awards and accolades, the last d elos which, Joseph prize Marsal Knight Radio Dénia Cadena Ser, in recognition of the contribution to the dissemination of traditional musical culture and the popular Cantata d'Havaneres. 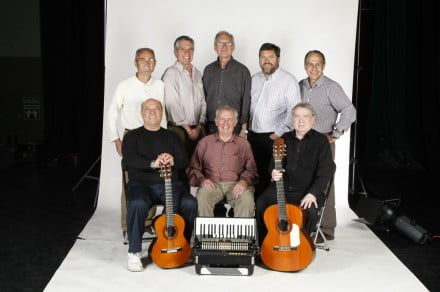 La Rondalla was born in the eighties, hand five amateur string music people. Soon, the group grows and happens to have fifteen components and only then offer the first performance, held in Cape. A little later will be integrated into the Federation of Orchestras Pols i Pua and from that moment the actions at the local and provincial levels occur. Currently, Vent, Pols i Pua consists of fifteen musicians, some with studies music theory, guitar and piano.

Among the festivals and events that have spoken this Contest Havaneras of Poble Nou (Barcelona), which were the most awarded Rondalla, the Provincial Festival of Rondalles or Folklore contest nostra terra de Benidorm, in which They won first prize 1985. In addition, the Rondalla has always participated in fesivales and acontecimeintos related parties and culture of different populations. Vent, Pols i Pua is also very close to groups and entities Denia and Marina Alta linked to the theater and festivals, with whom he collaborates.

Habanera sings Denia is one of the quotes which serves the Rondalla held since it began eleven years ago. The event, organized by the Department of Culture in July, will bring together thousands of amateur gets people to this kind of traditional rhythms.

On the repertoire of the Rondalla, José Luis Ronda, president and principal voice, explains that groups and traditional folk songs: boleros, pasodobles, waltzes, "although we would not pigeonhole mexclar and also know how to adapt to different needs"

Regarding the current situation of the group and future plans, Vicente Crespo, secretary and musician Rondalla said they would like the young people interested in this kind of music and be inspired to join the Rondalla, "because although we very excited, age slows for some things. " And it's why we encourage everyone to know and particpate in the Rondalla: "Any person who Giste string music and has gain to learn, that has no incinveniente to come to us, has the spuertas open in the Rondalla, a group of people to do whatever it takes will be "