The Community will receive 377 million for the Minimum Vital Income, which will benefit 280.000 people, of whom 82.000 are minors

The President of the Generalitat, Ximo Puig, has advanced that the Valencian Community will receive 377 million euros for the implementation of the Minimum Vital Income that will benefit 100.00 families and, as a whole, 280.000 people, of whom 82.000 are minors . 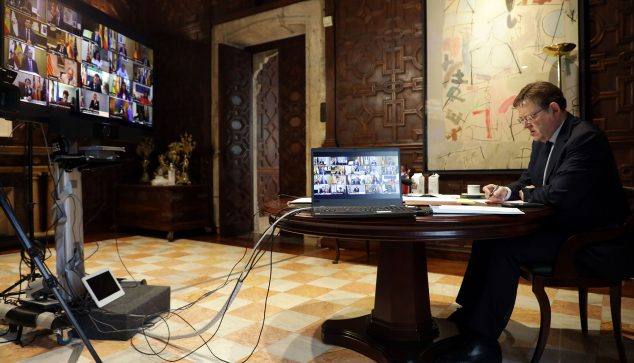 Ximo Puig advances that the Community will receive 377 million

The president of the Generalitat has appeared before the media after the meeting with the Prime Minister, Pedro Sánchez, and the rest of the presidents and presidents of the autonomous communities to address the evolution of the COVID-19 pandemic and the measures for de-escalation.

Puig highlighted in the press conference after this conference of presidents and presidents the "enormous relevance" of the approval of the Minimum Vital Income, which implies "a great step forward to correct inequalities between people".

Specifically, the Government's investment in the application of this measure in the Valencian Community will be 377 million euros and will be aimed at 100.000 families with incomes below 310 euros per month, with a total of 280.000 beneficiaries, of whom 82.000 they are minor (30%). 15% of these families are single-parent and more than 40% have dependent minors.

The president, who has highlighted the need for coordination between administrations so that income reaches beneficiaries in the most effective way, will request an agreement to co-manage this minimum income "as soon as possible".

The president has proposed to the central government at the twelfth conference of presidents and presidents the approval of four "joint plans" with the autonomous communities: an infrastructure plan, a plan to promote renewable energy, a housing plan to promote access to it by the youth population and to reactivate construction and a plan to support the mobility industry.

About the mobility sector, you have requested the activation of a plan "ambitious", "for the jobs it creates, for the economic development and innovation it generates and for its involvement in the fight against climate change".

"If cars are the main agent of pollution in cities, we have to reduce it by promoting the ecological renewal of the car park", said the president, who has also advocated for measures related to public transport, "one of the most affected in this pandemic".

Puig has also claimed the urgent reform of the financing model to prevent Spain's economic and social recovery from taking place at different speeds. "We cannot allow a reconstruction of Spain at two or three different speeds due to an inequality of origin that further accentuates income inequality", the president has argued.

"We have to move towards equity and that is why I have insisted on the need for fair regional financing"Puig stressed that he has asked for the "same capacity" to walk towards recovery without inequalities between territories.

Puig has insisted on the importance of unity of action and transversality to overcome the crisis. "It would be advisable for some political representatives in Spain to stop screaming and twitching. If the health curve falls and we are winning the battle of the pandemic and, on the other hand, the decibels of the debate rise, it is that something is being done wrong", has emphasized, to add: "You can monitor and criticize and, at the same time, dialogue and agree, because agreeing is not giving in, agreeing is not betraying".

"Citizens have not made so much effort to listen to daily fights on television. It is not time for shouting and blocking; it is time for word and action", has added.

Puig has indicated that the efforts to achieve this unity of action in the Valencian Community will focus not only on the work of the parliamentary commission for the recovery of the Community and on the Social Dialogue Table promoted by the Consell, but also in "a third branch, fundamental to give greater solidity to that will to rise together: the territorial scope".

Puig has also reiterated his intention to request the convening of a monographic plenary session in Les Corts that allows "collect all the initiatives that the different groups may propose with a European perspective", since it is essential - he has defended - that the Community "choose well" how, in what way and in what "wants to inject European money", especially after the Prime Minister announced this Sunday to the communities his participation in the management of funds made this week by the European Commission.

Puig has also appreciated that the Prime Minister has communicated that, from phase 3, the autonomous communities will manage the de-escalation and may request that the state of alarm be lifted in their territory.

On the other hand, the president has proposed institutionalizing the conference of regional presidents and presidents, because "It has been a very positive mechanism to propose common initiatives", as well as all sectoral conferences. "This cooperation of a federal spirit has to be strengthened for the challenges that come and that are not only the responsibility of the autonomous communities or the State, but to everyone.", has manifested.

In addition, he reported that he has also asked at the meeting "a legal framework for reactivation that allows, with legal certainty, to make laws more flexible to activate public and private investment".

The president has also stressed that, starting this Monday, the equator of the de-escalation is entered, with València as the largest Spanish city in phase 2, and the Valencian Community, as the second most populated autonomy that accesses its entirety to it.

Final phase of the ACB League

In fact, the president stressed, this week València has been chosen to host the final phase of the ACB Basketball League for its facilities and for its economic and social strength, but also for its health situation. "It is a symbol, a reflection that things are going well, and it will be a great showcase of that living and safe Mediterranean that we want to offer this summer", has indicated.

Puig, who has attributed to citizens the "merit of being out of the pandemic", stressed that the positive evolution can be seen in the fact that there were 386 people in ICUs, while there are currently 24 and that, of the 2.200 people hospitalized, there are now 161.

As you have also stated, "Hospital discharges have multiplied exponentially, since there were 240 two months ago; today there are more than 12.122 Valencians recovered from coronavirus", and the mortality rate is below half of the Spanish average.

Furthermore, in the last two weeks, 84% of the Valencian municipalities have not had any positive case of COVID-19. On the other hand, only 6% of people affected by the virus are admitted, and less than 1% in the ICU. Likewise, the Community has a very high capacity for diagnosis with PCR in primary care, which reaches 90% of suspected cases. "Of these, only 0,5% are positive, and the reproduction rate has been reduced to 0,75", has also materialized.

The president, however, has asked "prudence" because "That concentric responsibility, that look for the common good, that feeling of being a people and of all going together is the Valencian way against the coronavirus".