Satisfaction within Socialist ranks for success is getting your "Obertes freight program", Where different issues are discussed weekly and whose conclusions will form part of the electoral program presented for the municipal elections in May.

In recent meetings with militants and sympathizers were the central themes sport and youth. After discussing the proposals, the Socialist candidate, Vicent GrimaltIt has produced two catalogs commitments in both subjects.

The Decalogue on sport begins with creating a one-stop shop to expedite the necessary time to organize a sporting event procedures.

As a second point of the Decalogue, Dénia must be included among the venues hosting the 'Volta a Peu' La Marina Alta, and as a third point, establish a Rector of Sports Plan for years to mark the guidelines to follow in this area in Denia.

The fourth point states create the School Sports CouncilIn which they are represented the estates municipal and school boards, with the aim of establishing guidelines and initiatives to establish school sports field. The fifth point, meanwhile, is intended to impart training workshops for monitors with the aim of integrating a philosophy of sports initiation school in which social values ​​are encouraged and coaches use ethical training behaviors with minors. 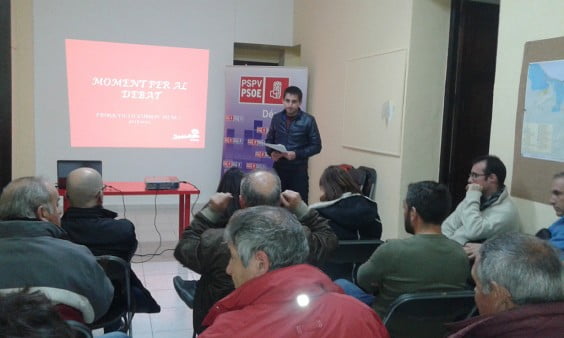 The Socialists also committed to encourage and promote sport among the most disadvantaged population by providing grants and designing projects that support the development of these activities as well as promote active tourism to supplement the current tourism in Dénia, points six seven of the decalogue.

In the eighth point intend to establish an intermunicipal sports model, the ninth is aimed at creating l'Escola del Mar and the tenth and last point is committed to establishing, together with users of municipal sports facilities, regulations, rules of use and prices for the use of such spaces.

On youth, the Decalogue begins with the improvement and adaptation of libraries from House of Culture and Baix La Mar, followed by enhancing the UNED University to pursue higher education of young dianenses without leaving the city.

On the third point, the Socialists are committed to a negotiation with the transport company ALSA road passenger implementing a bus pass for students dianenses to Valencia and Alicante. In addition they undertake to adapt the courses and activities Llunàtics to the concerns of young people in Denia and promote them through the issue of the missing Llunàtics Magazine in digital format.

Socialists vow to reframe use of various spaces it offered building LlunàticsFacilitating access to youth associations, primarily those that do not have a space to develop.

In the sixth item of the decalogue creates undertake "Consell de la Juventut" as a participatory consultative mechanism aimed at bringing the decisions of the council to the demands of young people. In point undertake enhance collaboration between the city of Denia and public universities of Valencia for conducting practical training and courses for young people "on demand", depending on the labor needs of employers in Dénia.

The eighth point concerns the empowerment of Municipal Housing Stock Exchange, the ninth on creating an entertainment area and the last point responsible commitment involvement of the "Fifths" throughout the year as "true protagonists of our Major Parties."

Balance of the PSPV of 2020: "Hui acomiadem, per fi, one of the most complicated years of the last decades"
December 30 2020
Leave a comment