With an unemployment rate of 16'42%, unemployment in the Marina Alta region has dropped four points since the year 2016. It is the figure that emerges from the report that the Observatori Marina Alta has just published on its website, in which the employment data for the years 2016, 2017 and 2018 are collected.

Temporality is the key to unemployment in this region, with the lowest unemployment rates in the second and third quarters that coincide with the summer vacation period, where hiring increases. 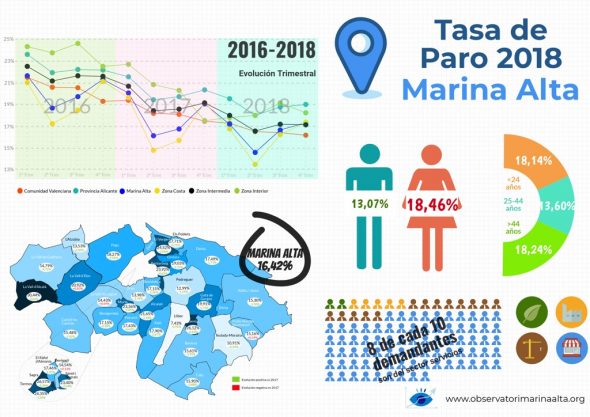 This tendency is eminently caused by the labor dynamics of the municipalities of the coastal area where the greatest economic volume is recorded due to the flow of tourists and visitors during their vacations, with the consequent increase in employability.

By demographic variables, there is inequality in employment opportunities according to gender, as the unemployment rate of women rises to 18,46% while in men it remains in the 13,07%. Regarding the unemployment rate by age groups, the groups of older and younger age are the most vulnerable in the search for hiring, since we found unemployment rates around 18% for both groups (<24 y>44 years) and an 13,6% in the intermediate age group (25 to 44 years).

The service sector continues to have a fundamental weight in the employment of the Marina Alta, since the 80% of the job seekers are from this sector, a clear indicator of the high seasonality associated with the sector. It is followed very far by the construction sector, an 16,5% are discharged as claimants of the sector.

Rebound "very positive" in employment in the Marina Alta during the last month
August 20st, 2020