The president of the Generalitat, Ximo Puig, has announced that the Consell is finalizing the generalized vaccination plan for the population, which establishes that the Valencian Community will have points for the administration of doses against COVID-19 in 161 municipalities. 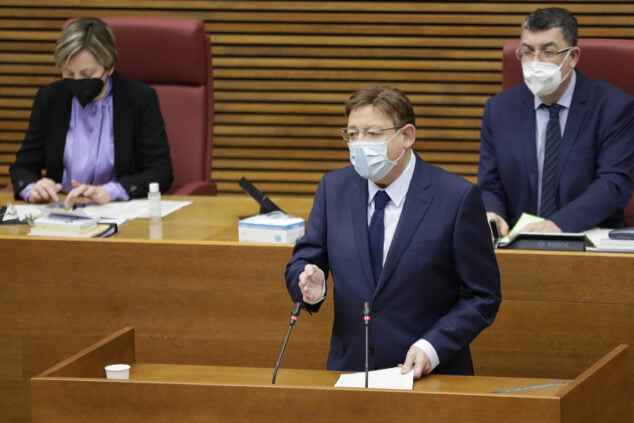 In addition to the spaces in Valencia, Alicante, Castelló and Elche, cities with more than 50.000 inhabitants will have different points and the rest will have locations in 145 municipalities

This was explained during his speech in the control session of the Corts, in which he recalled that the four large cities will have mass vaccination points (the Ciutat de les Arts in València, the City of Light in Alicante, IFA in Elche and the Palacio de Congresos in Castelló de la Plana) and has detailed that cities with more than 50.000 inhabitants will have different immunization points and that the health departments will set locations in 145 municipalities for the rest.

Likewise, it has been reported that, to face this massive vaccination of the population, it will have the staff of the Conselleria de Sanidad Universal y Salud Pública, with staff from mutual insurance companies and with the collaboration of retired health personnel through the exchange that has been opened for it.

Puig has started his speech by stressing that, if to face the "blow to democracy" which was the 23-F, which this week has been forty years, the answer was "citizen, political and institutional unity", the "blow to the welfare state" that represents the pandemic must be fought with "cohesion and unity of action", along with vaccination.

The president has remarked that vaccination is precisely the "great asset" to overcome the pandemic and recalled that a total of 100.996 Valencians are already immunized and that, until this Wednesday, 288.735 doses had been administered.

The president highlighted the "Roadmap" that the Consell has drawn up to face the health and economic crisis that the pandemic has generated is not the result of "improvisation" nor the "idea"Rather, it is due to actions taken following technical criteria and to a sustained economic effort in unprecedented healthcare spending.

He has referred at this point to the expansion of health capacities thanks to an investment in Health of 8.150 million in 2020, the largest made so far, according to the data from the budget settlement that the Consell will approve this Friday.

In addition, he recalled that "no community has helped that much" to the sectors most affected by the pandemic such as the Valencian Community.

Puig has alluded to the improvement of indicators after a few weeks "very hard"Thus, the cumulative incidence has been reduced by 88%, 12 points more than the average for Spain, since the maximum impact in the third wave.

In addition, as he has stated, the number of people with the disease has gone from 72.000 in the worst moments of the pandemic to 12.356 now, a decrease of 83%. "Unfortunately there are still 1.351 people hospitalized", But "it's less than half" that 14 days ago, has pointed out Puig, who has also referred to the fact that the number of people in the ICU has been reduced by 45% in the last two weeks.

Puig has indicated that these data have been obtained thanks to "great job" and "enormous effort" health personnel, and also to the joint responsibility of citizens in complying with the restrictions established to tackle the pandemic.

He has thus pointed out that the number of social relationships in risk environments has been reduced by 60%, above the reduction in Catalonia or Madrid and with the greatest drop in Spain. In addition, according to the data provided by the president, the number of people who do not have social relationships with people outside the home has tripled and the closure of the hotel industry has resulted in a reduction in mobility of 20%, which amounts to 35% in the city of Valencia.

"Rigor, scientific evidence and proportionality" have been the premises of the action of the Valencian Government at all times, has added the head of the Consell, who has highlighted the need to be "extremely cautious in de-escalation".