Ximo Puig announces aid of 2.500 euros for freelancers and companies in the tourism sector and a line of one million euros for music festivals

The President of the Generalitat, Ximo Puig, announced this Thursday direct aid of 2.500 euros for freelancers and companies in the Valencian tourism sector and another line endowed with a million euros for companies in the field of music festivals. 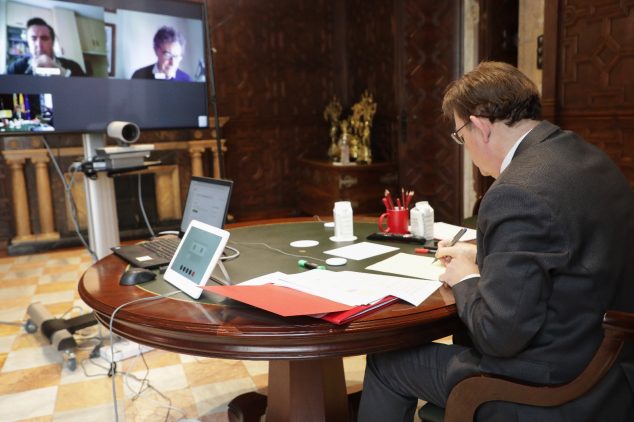 "The objective of the Generalitat is to show our support for these companies so that they can transit through this difficult period and guarantee their survival", stated the head of the Consell, who stressed the importance of this sector, "which represents 15% of our economy".

This has been stated by the head of the regional Executive after the meeting held with the regional secretary of Tourism, Francesc Colomer, and the general director of Tourism, Herick Campos. The president has advanced that the plenary session of the Consell plans this Friday to approve a decree of "palliative" direct aid, endowed with 6,5 million euros, for companies linked to modernization and qualification projects of the Valencian Tourism Agency with the objective that "they can maintain their activity" and mitigate the effects of the health emergency caused by COVID-19.

As the president has pointed out, containment measures and mobility limitations have accounted for 100% of the drop in demand for tourism, which also has a slower recovery forecast than in other areas of the Valencian economy. For this reason, as he has pointed out, "it is a duty of the Valencian Government to generate favorable conditions for a fundamental economic sector for the Valencian Community, promoting the urgent and exceptional actions that are necessary to mitigate these effects as much as possible".

In this way, the decree contemplates two lines of aid. The first of them is aimed at giving economic support to self-employed and SMEs that carry out their activity in the tourism sector of the Valencian Community and are attached to the CreaTurisme program, have the distinction of Sicted or are travel agencies. The amount of aid in these direct grants will amount to 2.500 euros, with a maximum overall amount of 5.500.000 euros of Turisme Comunitat Valenciana's own funds, to benefit around 2.500 self-employed and tourist SMEs.

The second line is intended for entities and companies adhered to Mediterranew Musix / Fest, which will have an individualized amount that will amount to a maximum amount that will establish a resolution approved by the president of Turisme Comunitat Valenciana, with a differentiated amount of amount to be paid in function of the program to which the applicant is adhered.
The endowment of these subsidies amounts to a maximum global amount of 1.000.000 euros, from the Generalitat's own funds.

The deadline for submitting these applications, which will be done electronically, will begin on May 2 and end on July 2.

The autonomous secretary of Tourism has stressed that the future decree "It contemplates direct contributions with the aim of keeping this business fabric alive, which generates product and which, at the time, knew how to guide its investments in issues such as the certification of quality standards".

Thus, the object of the legal text is the entities adhered to the Creaturism, Mediterranew Fest and Musix or Sicted programs, "given that they have contributed and are expected to do so in the future, to the generation of quality and experiential products that help us to differentiate ourselves from other competing destinations, as well as employment and territorial structure, "said Colomer.

It should be noted that, in addition to these direct grants, the Valencian Turisme Comunitat maintains grants for competitive competition for 2020, both those aimed at local entities (with a budget of 5.597.470,36 euros) and organizations and companies (with a budget of 2.610.000 euros). The agreements or nominative grants aimed at co-management will also be maintained, whose budget amounts to 8.170.000 euros.