Great meeting of the CFS Mar Dénia, which received a direct rival such as Futsal Lleida at the Dénia Municipal Sports Center. 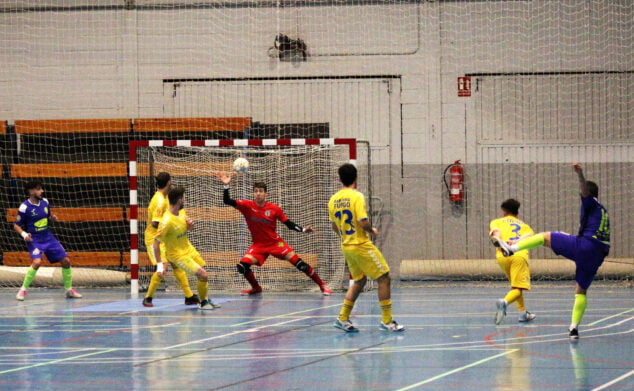 Dianenses players, aware of the importance of the points, jumped to the track very plugged and in minute 2 came 1-0, the work of Curro from outside shooting and, a minute later after a quick incursion on the band, Nico achieved the 2-0.

The game had a lot of rhythm and the chances were happening in both goals, although it was Mar Dénia who had control and generated better chances. In minute 6, it was 2-1 after a corner kick by visiting player Robert, who, free of marking, hooked a good volley and managed to beat Sergi shortening the score. Two minutes later a new marking error led to a new outside shot that meant 2-2.

The local players continued to generate multiple chances, but without success in front of goal. In the 19th minute, a long serve by Sergi on Jaume was deflected with his hand by a visiting player in his attempt to cut the play and the referees awarded a double penalty after having 5 accumulated fouls. Juanjo was in charge of materializing the action and got the 3-2 with which he reached the break.

The second half started with the same rhythm and after three minutes it was 4-2 after a quick counter well carried out between Juanjo, Jaime and Nico who scored at the far post. In the 26th minute Toni Tent scored the 5-2 shot at the edge of the area.

The Dianense team once again put distance on the scoreboard. The visiting coach called for a time-out and, although there were 14 minutes remaining, he put the goalkeeper player on the court to try to change the dynamics of the game, but in the 30th minute, after a throw-in, Curro got rid of his defender and put the 6-2 on the scoreboard.

The minutes passed and Mar Dénia with an iron defense and the security of Sergi under sticks managed to stop Lleida's attempts, although in minute 34 they managed to score 6-3, cutting distances, but for a short time since in the next play Luis Llinares managed to intercept a pass and threw from his field scoring 7-3.

The Mar Dénia closed its goal and defended the 5 visitor, with opportunities to extend the goal difference with long shots that did not see the goal until in the last minute Juanjo hit from his area and put the 8-3 with which he reached the end of the game, and that on the horn he tried again but the ball hit the stick.

In short, an important victory that ratifies the good moment of Mar Dénia, by the hand of Javi Arnau and Esteban Novoa, in this second round. Next Saturday, the Dianense team will travel to Manresa to face the local team, although the match will be held in the town of Arts 15 km from Manresa, as a result of having its facilities closed on the occasion of the elections to celebrate the day next.