A youtuber teacher from Dénia explains economics in the simplest way

Sergio Cruz teaches at the IES Sorts de la Mar to girls and boys of 3rd ESO and Bachillerato. Due to his skills in front of the camera it is easy to see that he knows about image: before graduating in Economics he studied Audiovisual Communication, which has now formed a perfect combination to embark on this adventure. Cruz has created a channel Youtube called "Economy in quarantine", with the aim of continuing with their classes and making them closer to their students. As has happened to much of the educational community, in a few days he had to rethink the way he taught and adapt quickly to do it on-line. How did you come up with it and how did you start it?

Gross Domestic Product, National Disposable Income or depreciation are difficult words that this professor transfers to his channel. "I still shoot some videos and become a youtuber"Sergio Cruz told a friend about three weeks ago. He decided to upload explanatory videos and corrections to the exercises, to make the task more enjoyable for his students and to explore its communicative facet. And he reached for his camera, bought a tie microphone (the ones that hook on the lapel) and went to record himself. In his videos there is montage, superimpressions that appear and disappear next to him, and the tone he uses is casual, with humor and irony. It seems that Cruz had thought about it but in reality it was the result of a need, that of being as useful as possible to his students.

Who was this teacher inspired by? Although it seems that he has soaked in the influencers of the moment, Cruz explains that he only sees channels for scientific dissemination, such as Quantum Factor. "I have not seen youtubers that teenagers see"So his transformation has been very intuitive and progressive: he doesn't like being in front of the camera but in his latest videos he already feels more comfortable. 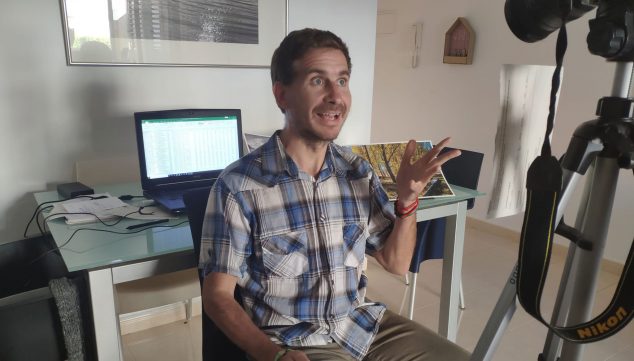 Professor Sergio Cruz during a recording

It has more than 200 subscribers, a lot of followers and boasts of having haters: "My friends are critical and help me improve".

The channel Youtube "Economy in quarantine" saved the first days when the Ministry's computing platform, ClassroomsIt did not work, probably because it was not prepared to support the entire educational community by uploading and downloading materials. So Cruz's videos began to be released and, in general, the students commented that they liked them and that they were useful to them. "The boys and girls who are involved in face-to-face class are very useful, my problem is the kids who have to be on top"explains the professor. Youtube It has the great advantage of providing content whenever they want, one hundred percent availability. The disadvantage is that the teacher cannot know who is taking advantage of the classes and who is not, so a very high level of self-discipline is required. 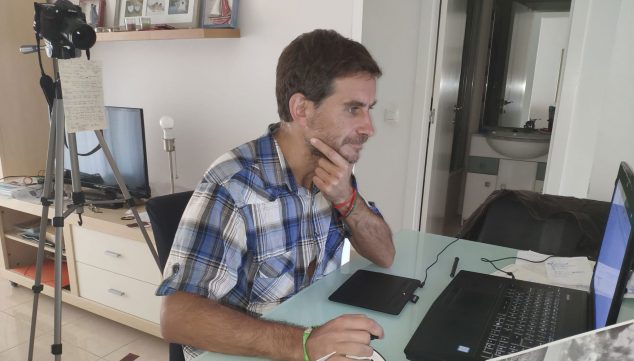 Sergio Cruz, preparing one of his recordings

The end of the course and the future of the channel

"Some students tell me that they would never have thought about it, but they really want to go back to school", explains Sergio Cruz. "Conselleria advises us to relax the agenda, to review and consolidate, but to move forward in a light way, so as not to stress adolescents," he continues. The most important thing is to find the balance between keeping them busy and not putting too much pressure on them, and creating a structure for the days, with planning and work routines, good habits and rest. The orientation department of the IES Sorts de la Mar proposes a routine schedule for quarantine days.

To the question of "How far are you going to go with your Quarantined Economy channel?"Sergio Cruz replies that at the moment, he serves the students and the educational community because he links activities and a manual so that other teachers see how he is doing it, so he takes it as his small contribution to improving this situation. Teachers are working a lot from home and Cruz believes that there are criticisms of teachers that are not fair. "When the quarantine ends I have thought about returning to my normal life, but who knows ...", aim. To the question of whether he is going to reveal the mystery of pajamas, he answers: "You have to leave them with the doubt, but read between the lines."

At the moment, this is his last video, in which he even allows himself to do audiovisual experiments: