A book published by a woman in the 1918 pandemic

We are going to present a book published in 1918, but whose origin is located three years earlier when the writer began to explore these coasts and landscapes of the Alicante Marina on a somewhat painful walk, says the author, who started when the railway stopped the Navy was not even mentioned, at the end of said railway it is a fact. 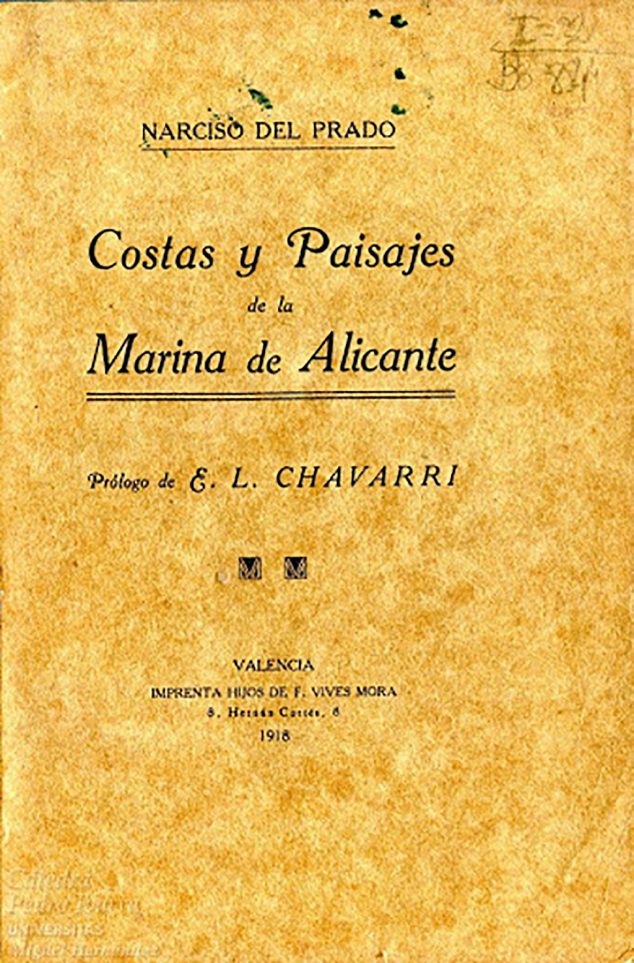 Cover of Coasts and Landscapes

He signs the book Narciso del Prado and has a foreword by Eduardo López Chavarri who at the beginning creates confusion for us, since his first two lines are How to resist the request of a lady who asks you for a foreword to a book? And it continues: Its author wants you to know the region called the Marina of Alicante. We are talking about the book Coasts and landscapes of the Alicante Marina. This contradiction with the name that suggests its author is a male and the female used by the prologue will be revealed later, but now we want to point out a piece of information regarding the time of its appearance. 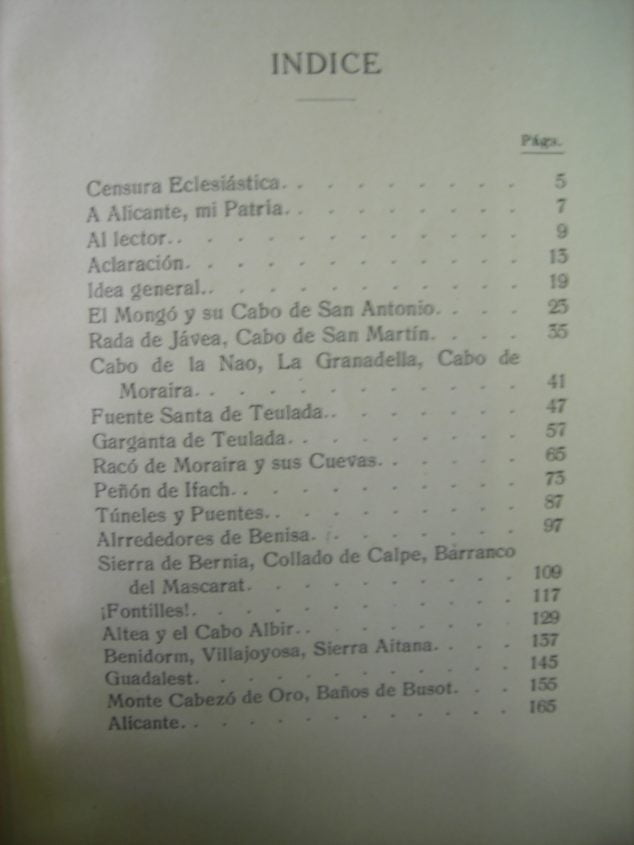 The time. It was published in 1918, the year that much of the world was plagued by a pandemic named after the Spanish flu and that of the cockroach. Its name was due to the fact that if the countries immersed in the First World War censored the news about the flu so as not to demoralize the troops, in Spain, being a neutral country, it was the subject of much information, hence the reason why It was known as the Spanish flu, when it had nothing Spanish, and on the other hand the consideration that the flu spread as easily as cockroaches or that these insects spread it. Precisely in that year and I believe, in my appreciation that it was not premeditated, but rather accidental, that at a time when civilization was immersed in a bleak landscape, the appearance of this small booklet was conceived as a jewel to raise the spirits of the reader showing the beautiful landscapes, not of the towns, of the coast that extends from Denia to Alicante, in a trip made by a woman where the emotions and sensibilities of women are appreciated. 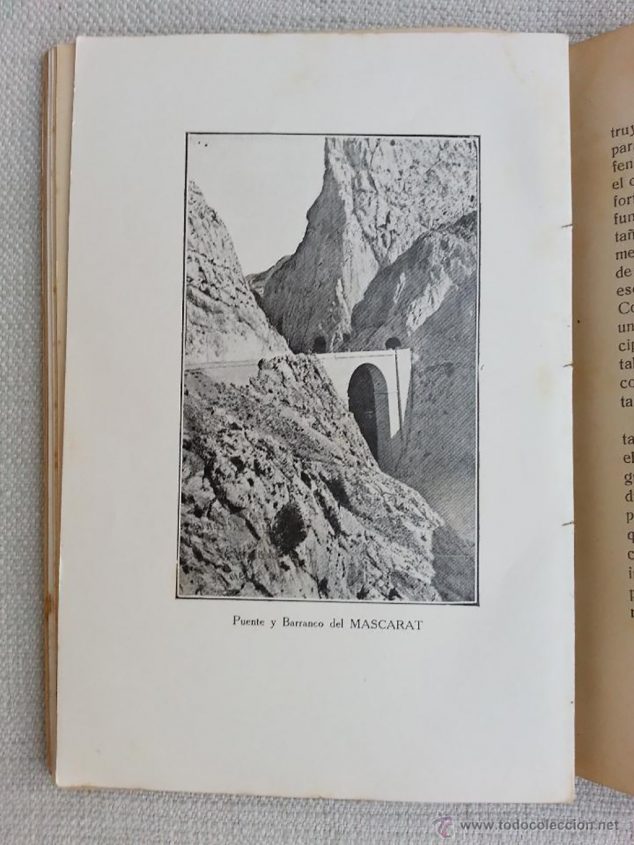 There is no place at this time to talk about that pandemic, although we will point out that in the magazine of Hygiene and Tuberculosis directed by the Dianense Dr. José Chabás said that it attacks mainly healthy adults (the majority between 20 and 40 years old), respects the elderly and is not serious for children. In Spain it left at least 260.000 dead.

En Xàbia the flu should also have been noted since in our annotations for the years 1917, 1918 and 1919 the incidence of deaths in the last three months of the year can be seen and the highest number is seen in 1918.

Having said that, let's focus on the book itself. 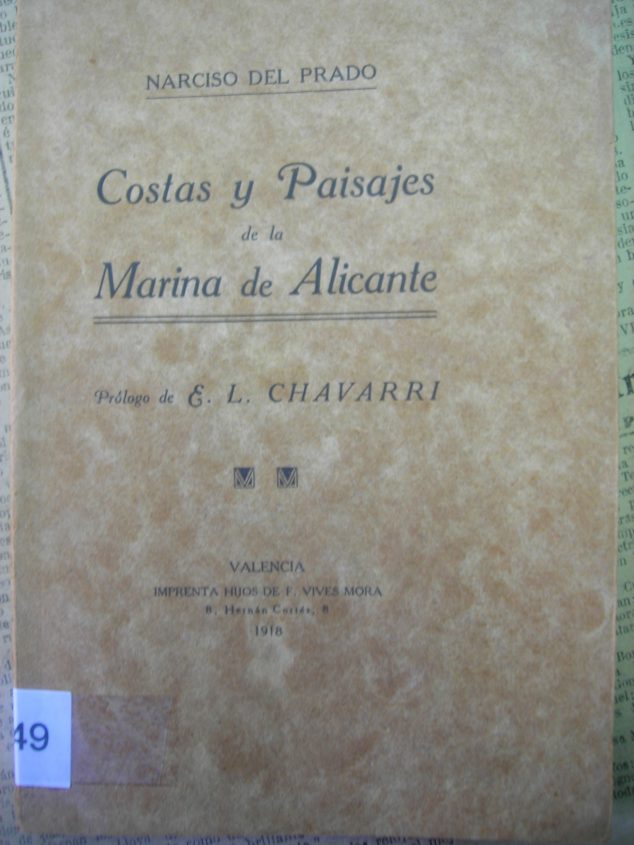 Preserved edition of Coasts and Landscapes

The book. On this Book Day, which will have no celebration because of COVID-19, it is good to speak of the book that appeared in that 1918 pandemic.

When this book appeared, the author was 73 years old. In this book the Alicante Marina is revealed, “… its beautiful coasts, its delightful corners, the wild, or peaceful, or austere, or friendly places, of that poetic outline… It is necessary to have a soul full of that intimate love of the native country, to nourish ourselves moved by the infinite sentimental “moments” that the country can suggest to us, and to want to communicate with generous impulse to the other people all the happy emotions that we previously felt… ”.

The content of the book covers the region that goes from the Mongó to the city of Alicante itself, stopping mainly in Jávea (three chapters dedicated to its term), to go to Teulada and Moraira (three more chapters), Benisa, Ifach, Bernia, Fontilles , Altea, Benidorm, Villajoyosa, Guadalest, Busot concluding in the capital of the province as we had said. But in the description he makes, he does not want to go into "details regarding the towns, because his purpose is only to describe landscapes and seascapes." 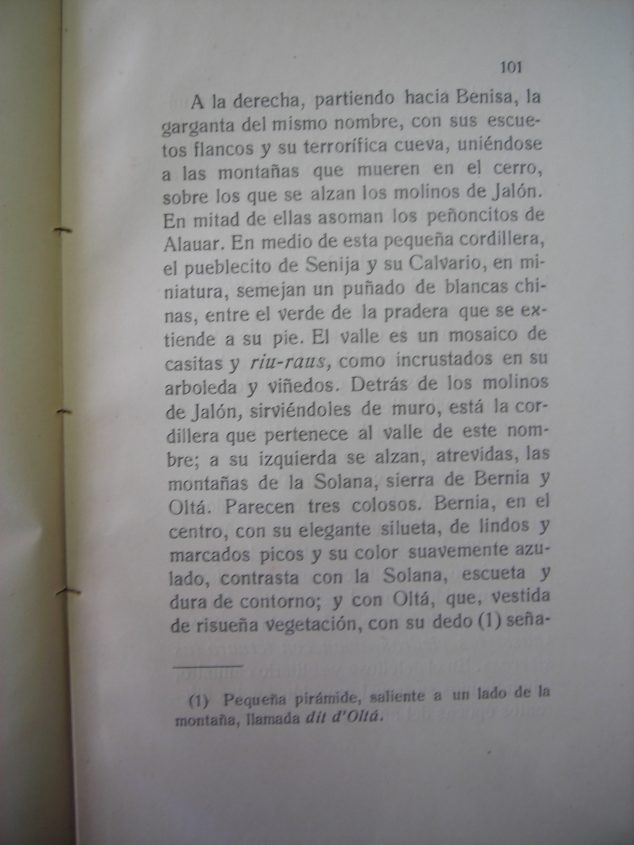 The author, who always uses her language as if it were an author, went up to the Mongó (without 't' counts: “let's rest for a moment, you have to get encouragement and courage to ascend to the high summit of the Mongó… Three painful hours crown our efforts… you climb, reader, clutching at brushwood, in thickets, pricking yourself with gorges, sliding down stony and sloping paths, leaning on protruding peaks, sweating, yearning for breath, excited the soul and enchanted the eyes. ”

And when he describes the roadstead of Jávea, he does it in the following way: “A vast semicircle that ends at the Cabo de San Martín, shows us the most beautiful roadstead that perhaps exists on the Levante coast in Spain. It is truly grandiose… The wide and beautiful bay of waters always calm… waters like an immense mirror that portray the ends in them… producing a highly poetic set for the artist; of calm and sweet meditation for the philosopher; of smiling grace and a pleasant impression for the lover of beauty ”.

These chapters dedicated to Jávea end with the following words: “I have described to you what my eyes saw,… I have shown you the beautiful; thereafter, he is silent; let's both concentrate; let us look at the lonely landscape with the eyes of the soul; let's dream and go back to the sublime ... ".

This book breaks with everything written by men and the feminine sensitivity and even her musical knowledge are appreciated, as when she describes the 'grotto dels orguens': “The acoustic phenomenon is heard with delectation; it is small, an imitation of the fantastic grotto of Fingal, in Scotland… Mendelssohn composed a beautiful symphony, inspired by the rumors of the famous grotto. ”

The author. Under the pseudonym Narciso del Prado hides Paulina Ibarra Blasco. At a time when writing a woman seemed that it could harm her prestige to the husband, who was also a lawyer, musician and writer, he chose this name alluding to a flower that grows with this name in the meadows, mainly in the Upper Pyrenees, the narcissus pseudonarcissus, one of the multiple varieties of the amaryllidaceae family and originating in the Mediterranean area, at the same time that it had a masculine connotation with mythological reminiscences.

He could not excel under pain of undermining the scheme that followed the social world. But also, when we read the book, the author tries to completely hide her condition as a woman, because possibly if this book, the reader had known, although it is said in the prologue, that it was written by a woman, the readership index would have been much less and the latent prejudices about what a woman wrote, were unfavorable to him. This concealment of her femininity is done consciously with the use of masculine gender personal pronouns.

Furthermore, Paulina played with some ambiguity in this regard when in her novel “A Freethinker"Published in 1914, bears the following dedication:" To Ricardo Benavent and Feliu. Accept this memory that with all the effusion of his soul offers you your inseparable and faithful friend Narciso del Prado. ” In addition to this novel, Paulina published a theatrical play in 1910 A handful of streamers: little box of regional customs and in 1917 he published a book "Moral articles”In addition to numerous articles in various media.

In this same year of the influenza pandemic, in June 1918, the Valencian Culture Center named her Corresponding Director, identifying her with her own name, pseudonym and activity, as the press said: Paulina de Ibarra de Benavent (Narciso del Prado ), writer, in Benissa. He delivered a paper that we have not found but that Francesc Martínez Martínez was sure to consult for his books on customary law.

She must have been born around 1845 and before 1899 she was married to Ricardo Benavent Feliu, who has his roots in Benissa where he has his pairal home, although the marriage had no offspring. "It is, then, according to the news, a kind couple who travels the world in perfect agreement and mutual correspondence of hobbies and tastes, making life pleasant in pursuit of the good and the beautiful ..." said a publication of the time .

To complete the picture we are going to talk about her husband, Ricardo Benavent Feliu who published in 1899 A walk through Central and Southern Europe in two thick volumes. He dedicates this work to his wife and we are interested in remembering the dedication that appears at the beginning. "To my wife. I would be notoriously forgetful, and I would even be ungrateful, if I did not dedicate this book to you, my dear Paulina, which owes its existence to your incessant and solicitous requests. You have been the cause of resolving to consign all my impressions, received in a series of seven trips; you, the one who has given me encouragement to collect my memories, so that they do not get lost in the oblivion of the years, and to succeed in the arduous undertaking, for me, of composing a book, when I have only tried myself, up to the present in articles on art. Here is my finished work. Accept it, then, as due to your constant effort; May he give you proof of my deep affection, and, be very sure, that you are the inspirer of all my impulses and all my conceptions. Your husband. "

Also published in 1903 published Art, aesthetic considerations about fine arts in general and especially about music. Following the chronology published in 1913 The main cathedrals of Spain (Romanesque and Gothic): critical and descriptive essay preceded by a study on the expressive power of architecture and a comprehensive picture of artistic manifestations. In 1920 it comes to light Critical-philosophical history of architectural art from the most remote civilizations to the present and its continuous evolution.

He was an accomplished pianist, playing eighty-many concert pieces, including Bethoven's nine symphonies, without sheet music. In this field he wrote a Mass in honor of the Purísima Xiqueta to mixed voices and orchestra. In 1920 he joined the Valencia Culture Center as an artist director, being presented by Francisco Martínez Martínez.

Paulina Ibarra is featured in Carmen Ramírez Gómez's book Women writers in the Andalusian press of the 1900th century (1950-XNUMX) as well as in the Javiense Short Biographical Dictionary while Ricardo Benavent Feliu has references in the book edited in Berlin by Antón Mansch: Intellectual world. Gallery of contemporaries in the field of Arts and Sciences and in the Dictionary of Valencian Music directed by Emilio Casares Rodicio.

It only remains to promote that Paulina's work that we have spoken about be reproduced in facsimile so that it can be enjoyed nowadays when the pandemic ends, at the same time that it will serve to provide work to a printing press in times of job insecurity.