A goal from Lucas, in the second half, served for Dénia to wipe the initial goal scored by the Valencians and to bring a point to the Marina Alta. It was not the best day for those of Manuel Esteban who were surprised by an Alginet who came out with a lot of strength at the start of the crash. 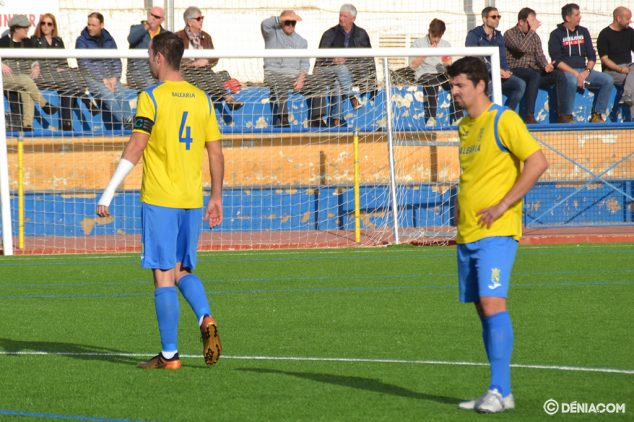 Lucas with Ferrán during a match

During the first half it was the locals who squeezed the dianense ball out a lot. The small size of the field caused the ball to last very little, so they found it difficult to play football. The Alginet controlled the rhythm of the game against an opponent who could only defend himself in order of the attacks of his opponent.

The prize for the best game for the locals came as a goal. The Dénia was not lucky since it was his defender, Lucas, who scored in his own goal after the ball hit him on his knee after a clearing of Maxi goal. Again the groguet team was placed below on the scoreboard and had to row to try to level the match.

In the second half a different Dénia was seen, with more air, looking for the few holes that the local defense left. Esteban had to vary his initial approach and start playing more offensively. This new way of playing allowed him to clearly dominate an opponent who locked himself up to defend his income.

Football was just this time and if misfortune chased Lucas with his own goal, it would be this same player who scored the equalizer. The Dénia took a side foul that was finished off very well by Lucas, housing the ball at the bottom of the net of the local goal.

There was no time for much more, the clash ended with a draw to one, which can be considered as fair since there was a part for each team. Dénia still does not win, being this already his third meeting in which he does not achieve the 3 points. In the last three games, nine points has only added two.

Now the team has to focus on the next meeting in which Diego Mena will receive the visit of Carcaixent, one of the teams currently in promotion promotion.

Basketball, Handball and Valencian Pilot join the cessation of their competitions
March 14 2020