Sadness for the loss of CD. Dénia 5 to 3 in Benigànim

Dianenses fans who traveled to the Benigànim municipal field returned with sadness in their faces for the defeat of the CD. Dénia by 5 3 to. It was a strange game with a part for each team. 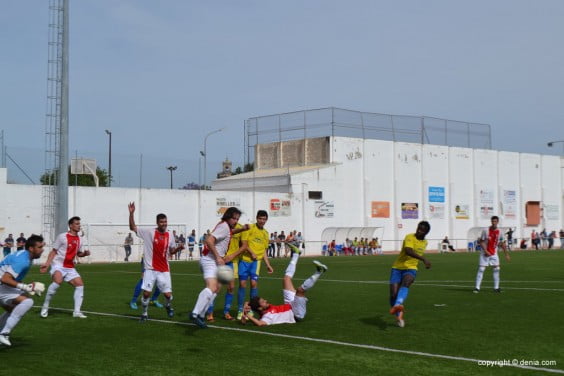 The meeting began with domain local 9 in the minute had the first opportunity, which foiled Maxi in a dogfight with a rival. 11 minutes into the Benigànim took the scoring with a goal from Antonio who advanced to the action of the defenders.

In the 16 minute again hand in hand of Maxi with Mateo, this dribbles goalkeeper Dianense and his shot is taken by Ferrán on the goal line. This play woke the CD. Dénia that in the minute 18, marks the equalizer of the tie in a lateral fault that Faye finished.

Four minutes later the 1 arrived at 2, again Faye shot and beat Cristian. The men of Jesús Moratal They controlled the game, but the minute 27, Matthew saw ahead of Maxi and put the ball in the square, was the tie to two.

In the minute 43 Faye entered the area being knocked down by Bas, the referee charged maximum penalty that transformed Gervasio in the 2 to 3. With this marker came to rest.

After the break, the home team came out pressing and the equalizer in minute 53 corner was finished off by Campos at the near post header, meaning both the equalizer.

61 the minute came the most controversial play of the crash, Maxi on its way out seems to not touch the local front, but the assistant band will mark the referee penalty. Kevin ran it marked the 4 3 to.

This both ended up off the CD. Dénia party. The team disappeared from the field and charged much both of his rival. There was no strength to rise and those who were sentenced local dialing through the mediation of Matthew the 5 3 to 83 in minutes.

At the end of the clash joy that promoting local promotion and ensure dianenses have to wait for what happens in the Contestano-Massanassa dispute this afternoon.