Teamorfosis teachers is an integrated theater of Marina Alta arising with the aim of developing activities theater, film and visual arts especially aimed at children and youth association. Its members share material for optimization of materials and equipment, collaborate in different assemblies or activities undertaken and jointly seek resources to carry out their projects. 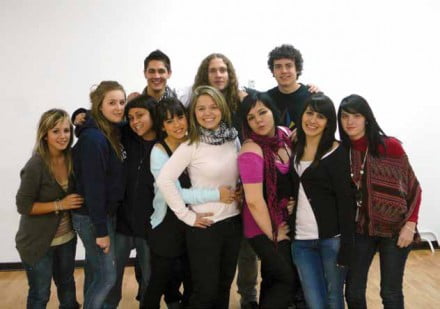 Denia, Juan Luis Lopez, president of IES and professor Teamorfosis Historian chabas, has developed several projects, including several musical with a group of young people interested in this art form. "This is a group of young people between 14 and 26 years, from its participated in the Festival of the Cançó of Dénia of 2007, aim to improve and complete their training and skills in singing, dance classes and interpretation".

The first musical they put on stage was "Momo and music", in the summer of 2008, "and from there they were very motivated and decided to continue working", explains Juan Luis López.

With the idea that they could move forward in their training and preparing new representations, the Department of Youth gives them a classroom facilities Llunàtics, where they attend one day a week to drama classes with Juan Luis Lopez, singing with Silvia Peña and dance with Shaina Jones and Rosa Argüelles. In 2009 they accounted musical "The apple of discord", an original work of Juan Luis Lopez, who was well received by the public.

According to Juan Luis López, this youth group is able to launch their own association, create and develop their own initiatives, so from Teamorfosis encouraged them to undertake this new challenge. In this line, Paqui Jiménez, member of the group, reports that have already begun the process to form the association "Gama, Artistic Musical Group of Marina Alta", with which they would like to collaborate with institutions and bodies of Denia and Marina Discharge to stage musical montages. On the Internet, You Tube, you can view information and view videos of his recent performances.