The number of people affiliated to Social Security on the last day of April was 51.802, which means that the system registered 152 fewer affiliates than at the end of last March. 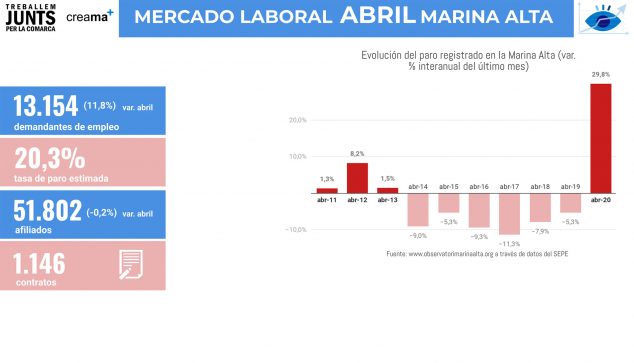 To obtain a more accurate picture of the evolution of employment and its impact of the crisis caused by COVID-19, it is necessary to know the monthly evolution. As of April 30, the number of people affiliated in the Marina Alta represented a 0,2% drop compared to March. This behavior compared to last month supposes some stabilization of employment after the 3,4% decrease that occurred in March with respect to February (despite the fact that last year, from March to April, 1.073 employed persons entered the labor market).

The decrease or stagnation in the number of affiliates in the different sectors of activity is notable, with the exception of the special agrarian regime, which has increased by 8,6% compared to March.
In the last year, the employment system in the region has lost 3.439 people (-6,6% compared to April 2019) and unemployment grew by 3.023 compared to the same month last year (29,8%).

In the month of April 13.154 people were registered in the employment offices, which is the biggest rise in an April month of the entire historical series (registered unemployment increased by 1.385 people, this translates into an increase of 11,8 , 20,3% compared to last month), this generates an estimated unemployment rate of 10.187% in the region. Although, by activity sectors, this general increase in the number of jobseekers continues compared to March, we highlight the incidence of this health crisis on the economic activity of the service sector (1.021 unemployed). Of the 67,3 new unemployed in the tertiary sector, 27,8% are concentrated in the coastal zone. The special repercussion of unemployment in the service sector continues to be borne by the hospitality industry, since it represents 3.646% of the total number of claimants in the Marina Alta (2.325 claimants), followed by activities related to trade, construction and administrative activities and services. auxiliaries (1.585, 1.307 and XNUMX unemployed respectively). 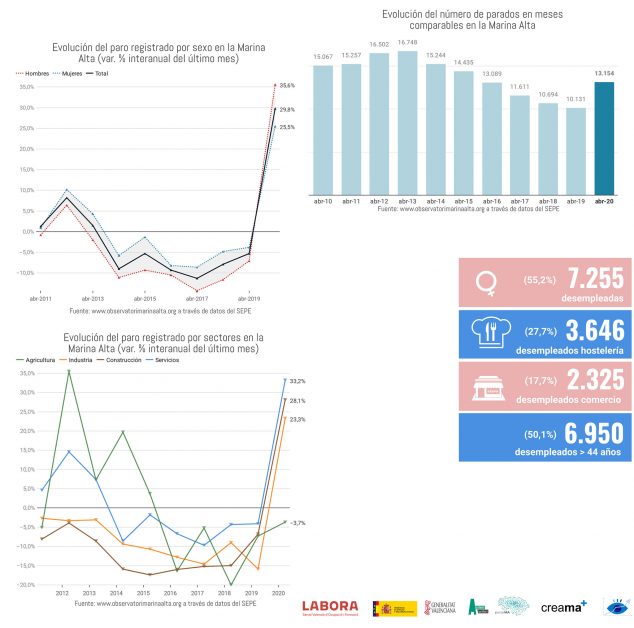 With the month of April we obtain a real pattern of the short evolution of the labor market, on the one hand, we have registered the number of affiliates to social security and, on the other, jobseekers, we have to count the number of contracts registered during the month of April. During the last month, 1.146 contracts have been signed, while the same month last year were almost four times more (4.399). Although the proportion of hiring has revolved around just over 50% in favor of men, both in previous months and its equivalent in April last year, in this last month, the reason has been very unbalanced, with a 64,5% in favor of men.