Do you know who Patricio Ferrándiz was? Find out «Street by street»

It is likely that you pass daily by Patricio FerrÃ¡ndiz, one of the longest streets in DÃ © nia: it crosses the urban area connecting Plaza Jaume I with the port. But who was the character that gives it its name? We begin a series of articles in which we will know the importance of the figures that give name to many streets, and that go unnoticed despite being part of our daily life. 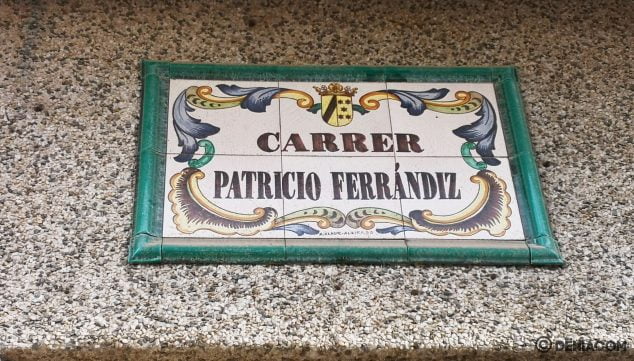 Plaque of Patricio FerrÃ¡ndiz street, very close to the intersection with Sertorio street

Patricio FerrÃ¡ndiz Monerris was born in 1824, and was a municipal master of works at different stages, as well as an intermittent councilor for the City of DÃ © nia. The main and summarized data is that FerrÃ¡ndiz was the head of urban planning in DÃ © nia in the second half of the XNUMXth century.

Towards 1866 the idea of the need to demolish the walls for a matter of health was installed: "They are an obstacle to the circulation of the vents and of public health", according to the book by Vicent Balaguer "DÃ © nia: Personatges populars". Agree demolish the walls and take walks, and in addition, the teacher Patricio FerrÃ¡ndiz is in charge of project the whole widening of the city.

The next important moment was the writing of the PlÃ nol GeomÃ¨tric in 1867: from that moment on, everyone who wanted to build in Dénia had to stick to this plan, so that the streets would be traced as marked. With the PlÃ nol GeomÃ¨tric streets like Candida Carbonell or Diana. Other works projected or directed by Patricio FerrÃ¡ndiz in those years were the Roundabout, where the market was built, and where it would begin Marqués de Campo, with a width that did not exist then in DÃ © nia.

Patricio FerrÃ¡ndiz was also responsible for the execution of the DÃ © nia-Ondara highway, and carried out different projects to channel the irrigation channel of Saladar.

Around this area, the Saladar, Ferrándiz had many interests: much of his numerous heritage in Dénia was there. According Javier Calvo In his book "More dianenses of the XIX century and principles of the XX", his enterprising character made him propose to the City Council to build a shellfish farm near the Saladar canal, something that never came to an end. An uncovered section of the ditch was called TallandÃ © street, after renamed Patricio FerrÃ¡ndiz street.

Thanks to this urban planner from the late XNUMXth and early XNUMXth centuries, the Passeig d'Arriete (current Passeig del Saladar), a name that possibly remains in the memory of many people, became the property of the city. Patricio FerrÃ¡ndiz made this donation of part of his properties to the town.

DÃ © nia.com has not found old photos to know the face of this character, not even in the Municipal Arxiu. The most likely reason is that he was a municipal worker, and his figure was not expected to transcend. Photos and any other type of image in the late XNUMXth and early XNUMXth centuries were very rare.

If you want to know more characters that give name to the streets of Dénia, these are the ones published so far:

Diego Mena: “We will open in June with great uncertainty, but I am convinced that in Dénia we will work well because we have many national and second-home visitors”
May 26 2020
4 Comments