This route owes its name to the Iberian town through which it passes: the Alto de Benimaquia, a vestige of the XNUMXth century BC.

The starting point of the route is located at km 9,6 of the CV-735 road, the Dénia road.Xàbia: you have to look for a paved road next to an Occupational Center. When this path ends, about 300 meters on the right, a steep path begins that goes up to Alto de Benimaquia. From here, the slope ends and we surround the Iberian town on its left, until we find "The guardian's house", a little house with benches and a table that is kept in good condition. From here we take the path that is on the left and that goes through a pine forest. We will pass through different marked crossroads and we must not lose the main path. passing through different signposted crossings so as not to lose the main path. In the end, we arrive at the Coll de Pous.

This itinerary is in the western part of the massif of It montgó, and you can see it marked in light brown in the following photograph, extracted from Cartographic viewer of Natural Parks.

Route Benimaquia-Coll de Pous, marked in light brown, on the left of the image (Source: Natural Parks of the Generalitat Valenciana)

The estimated duration is 1 hour and a half.

This route is considered to be medium difficulty because of the steep slope at the beginning.

The cumulative elevation gain is 170 meters. A maximum height of 196 meters is reached and the minimum is 42 meters.

In the 80s of the last century, exhumations carried out by the University of Valencia in the Iberian town of l 'Alt de Benimaquia they discovered there the oldest wine presses in the western Mediterranean. 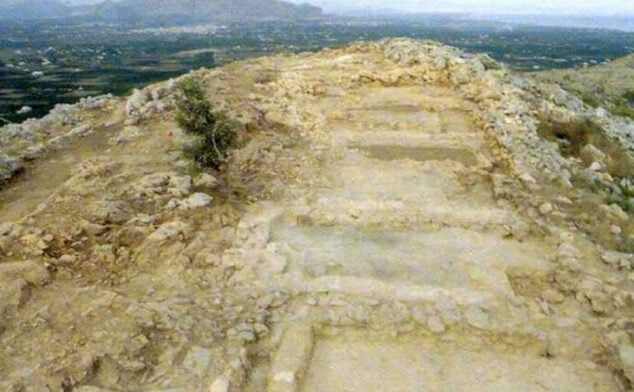 For its part, the Coll de Pous site, which was also studied in the 80s by the Museum of Dénia, could have been a large Iberian settlement between the XNUMXth and XNUMXrd centuries BC, with great importance for the formation of the Dianium later Roman.