The 3 Michelin star chef Quique Dacosta has been distinguished today with the Gold Medal for Merit in Fine Arts 2020. The Council of Ministers, at the proposal of the Minister of Culture and Sports, José Manuel Rodríguez Uribes, has approved this distinction to different cultural personalities who have stood out in "The field of artistic and cultural creation" or "have rendered notable services in the promotion, development or dissemination of art and culture or in the conservation of artistic heritage." 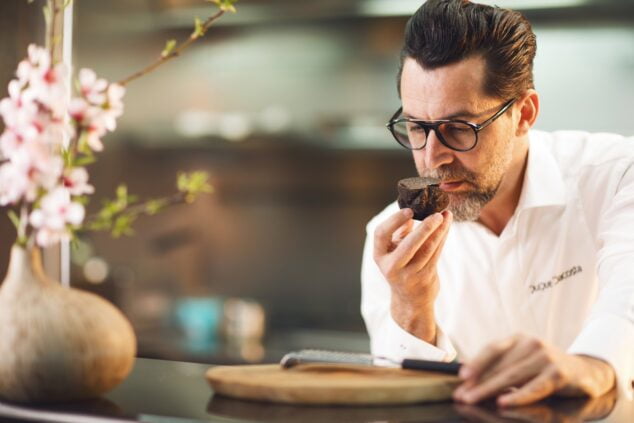 After receiving the news, the chef was happy: "I am very proud to represent gastronomy, cuisine and hospitality in this award in such a difficult year for everyone." And he wanted to thank the Ministry of Culture for "its sensitivity to gastronomy." This recognition represents "relevant support not only for our work but also for a sector that has so much talent", he pointed out.

Nor has he wanted to forget his professional family: "My team is a fundamental part of my life, without all of them this award would not be possible." And he remembered all those who join forces every day so that their signature gastronomic proposal becomes important every year: “It is also an award for suppliers, producers, farmers, ranchers and fishermen who strive so that we have the best tools to tell our story ”.

In this edition, the rest of the personalities recognized with the most important award in culture are the composer and singer Pau Donés, the actors Antonio Resines, Adriana Ozores, Emma Suárez, Carlos Hipólito and Álvaro de la Luna, the designer Andrés Sardá, the singer Rosario Flores, the film directors Montxo Armendáriz and Álex de la Iglesia, the dancers Sara Baras and Antonio Canales, the musicians Manolo García and Gustavo Dudamel, the soprano María Bayo or the philosopher Emilio Lledó, among others.

Dacosta, also distinguished as Doctor Honoris Causa in Fine Arts in 2013, has become an international reference in gastronomy, highlighting the creativity and avant-garde of its language in the kitchen, in addition to constantly working on a survey of the territory in which it is located. locates with an innovative look, and always maintaining its disseminating status.

The chef, who last year received the Award as Best Entrepreneur of the Spanish Restaurant by the Royal Academy of Gastronomy, has placed his restaurant with three Michelin stars at the top of the most important lists in the world, such as Opinionated About Dinning, which positions it in the last five years as one of the top ten in Europe, having occupied number one in the ranking for two consecutive seasons.

The chef is the creator and gastronomic director of the Mandarin Oriental Ritz Madrid, which will open its doors in the coming months, as well as being the owner and creator of El Poblet (2 Michelin stars), Vuelve Carolina, Llisa Negra, Mercatabar, and ArrosQD, his bet more international in the heart of London.

Dacosta has crossed the borders of the kitchen with his creativity, becoming the host and co-producer of Una Vida Una Cena, a hit series on Amazon, in which Dacosta cooks the life and feelings of different international personalities from culture and sports.

In addition, The beauty and artistic inspiration of his kitchen has been the object of investigation and analysis by one of the most prestigious publicists, Toni Segarra, and The Mediapro Studio, who created Cocinar Belleza, a documentary inspired by his work.

Dacosta also stands out for his work as an ambassador for Action Against Hunger, and collaborates with other charitable causes such as the Restaurants Against Hunger campaign with the aim of raising funds against child malnutrition.

In his informative work, the chef has published several books. "Contemporary rice", "3", "Tapas with Quique Dacosta" and "Transformed landscapes", make up his bibliography throughout his career.