Despite losing, the Mar Dénia faced the Hospitalet leader (6-4)

The CFS Mar Dénia falls defeated on the track of the Hospitalet leader by 6 to 4. On this occasion, for the effort but, above all, for the game made the dianenses deserved better luck. 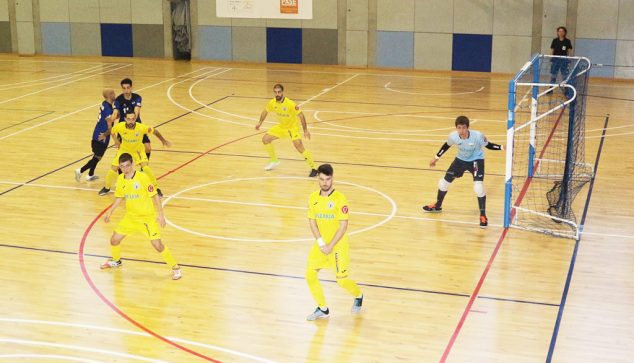 The match began with a rhythm from the initial whistle and the first few occasions soon arrived. Things got very complicated for dianenses since in the fifth minute they lost 2 to 0. Many nerves and inaccuracies in the yellow team that did not find a way to stop the best game of the premises. With the passing of the minutes they changed their nerves for tranquility and that was noticed in the game.

The boys of Jorge Durán happened to have the control of the party. This domain was reflected on occasions that incomprehensibly failed to materialize in goals. In addition, there was an arbitrary inclination that was not at all partial that irritated the players' spirits over and over again and left a clear demolition in the visiting area for the youth Jorge.

The Dénia Sea enjoyed its best minutes, in which it managed to enclose the local team in its area but without fruits. But again a loss of the ball caused a rapid attack by the Catalans that ended Ferrán's own goal. With the 3 to 0 the rest was reached.

At the start of the second half the Dianenses players continued in search of the comeback and in the 23rd minute came the 3-1 work of Miguel after a good play per band. But there was little joy in the visiting bench, because a minute later the Hospitalet scored 4-1.

In the 29th minute it was Curro who, after drawing several players through the center of the court, scored 4-2. But once again a defensive mistake became the next play in the 5-2.

The Dianense set combined claw and good game with incomprehensible clipping for this category. In the absence of 5 minutes to go, the Dianense coach, Durán, put on the player goalkeeper track and got its fruits since a minute later, after an outside shot by Alex Pla that he played on an opponent, he achieved the 5-3.

Subtract time and the stalking of the rival goal was continuous and more when in the 38th minute a new strike by Alex Pla from the edge of the area served to make the 5-4. But everything fell apart when on the next play a defensive mistake returned to punish the Dénia Sea, as the locals made the 6-4 with which they reached the end of the game.

Next week, CFS Mar Dénia will receive at home the Santa Coloma B Industries, a subsidiary team with youth and class in its players. The match will be played on Saturday at 18 pm at the Joan Fuster Pavilion.

Basketball, Handball and Valencian Pilot join the cessation of their competitions
March 14 2020