And we arrive at the end of this 2021, and as it has been traditional, the Popular Party carries out the balance of this year so hard for everyone. 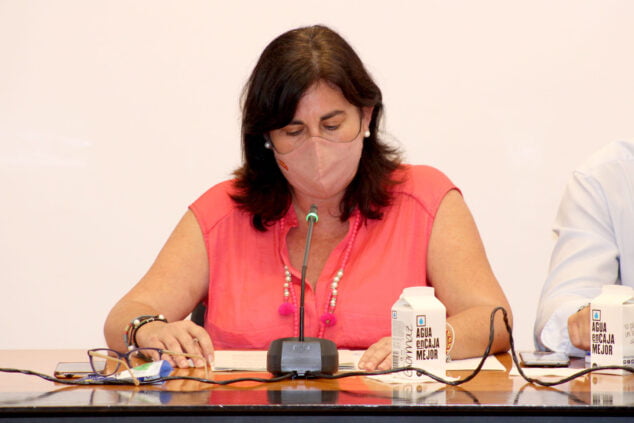 María Mut, spokesperson for the PP of Dénia, during a plenary session

We believe that Dénia deserves a government team that truly cares about the problems of citizenship, that knows how to measure up, made up of people with experience in management outside the political sphere and that, really, manages. People convinced that listening and talking is much more than saying “let's take note”. A government team that accepts its mistakes and knows how to rectify. That is what we believe that Dénia deserves and what we want to give the councilors who in Dénia represent the Popular Party.

Throughout this year we have presented 16 motions for the benefit of our neighbors. Some of them, 5 to be exact, were not approved or did not even reach their full debate (implementation of QR codes to know the history of Dénia, creation of the library of uses and customs of our elders, and the 10 necessary measures to The economic reactivation of Dénia, among others), 2 of them will be debated in the plenary session tomorrow (request a budget for the National Police Station and the inclusion and social cohesion plan, which seems to be approved). The remaining 9 were approved at the time, of which we highlight the motion on the regeneration of the Raset dunes, the one on public cost management, the debate on the State of the City, the adhesion to the network of cities of the science and innovation, and the payment of university scholarships by the Ministry.

For this reason, from the beginning, we have proposed these actions to improve the lives of all, but we have the Government team that we have, the answer has always wavered between the "estem treballant en aixó" and the NO, although both things have come to mean the same thing.

We started the year by raising a list of actions in which the Popular Party requested, among others, the reduction of administrative fees for the creation of new businesses, market fees and the garbage fee.

What did he do PSOE? In the best of cases absolutely nothing and in the worst increase the rate of garbage and the rate of the nursing home last October.

And what has this government team done to help its neighbors, businessmen, the daring entrepreneurs who want to start a business in our city and create jobs?

We already tell him "Nothing at all".

Of a budget of more than 60 million euros that the Dénia City Council has, only € 343.500 have been allocated in the Parenthesis Plan to help the self-employed and SMEs of Dénia. An amount that does not represent even 0,006%, and as if that were not enough mockery, they try to make us believe that more businesses are being opened than ever when the reality is that this year we have all witnessed the closure of numerous shops and establishments in our city . How many premises and offices have we already seen with the signs of "transfer", "liquidation by closing" and the like?

Nobody benefits from this, neither the families who ran the businesses nor the families of the people who work there. It is bad management.

While in other neighboring towns, governed by the PSOE, the occupation rate of public roads has been suppressed to help bars and restaurants, in Dénia the Popular Party officially requested the suppression of said rate and the PSOE's response was NO. That they would reward her. Do you know the lion's requirements for the bonus and how long it takes to solve? Ask yourself the bar you like to go to the most.

More help !!! In October the PSOE approved the modification of the fiscal ordinances that govern our city and, among them, it approved the increase in the rate of market stalls, another rate that the Popular Party requested to be lowered. What a good time, huh !!

Stop by and ask them how good they are. Yet another example of the
# malagestión of the PSOE.

This lack of management or # malagestión and desire, is seen in every corner of our city in the big things and also in the small ones. We have asked for active and passive, full after full, the repainting of the zebra crossings of our city. In the end, we have made a small book of photos and we have sent them to the councilor in charge of check-in, to see if he finds out at once because they still do not paint themselves with the danger that this entails.

More of the same What do you think that the PSOE has not been able, to date, to give the necessary orders to fix the tracks of Burrows that are practically useless? That in addition to being a meeting place for young people in the open air, it is used for daily training. But nothing, they still do not want to undertake these repairs, which are pure maintenance and security. Another example of his # malagestión.

And the Department of Urbanism? More and more staff are being hired without any use whatsoever. We get the impression that a million people could work there and the licenses would still be stuck. That there are businesses that opened in 2015 and today they DO NOT have it yet! Or worse, that they have closed without ever having it. This is undoubtedly # malagestión.

What are you going to do to solve all this? Get on your batteries and get to work? Spend a little more money and hire staff to have the beautiful gardens? And this surely just before the elections, and the rest, do we forget?

We do not forget. We are going to continue fighting to solve the problems that we have today in Dénia and that are not few. And if we have to continue colliding with the wall of “no” and “estem treballant en aixó”, we will do so, until it is demolished. Because the citizens of Dénia deserve something much better and because the people who represent the Popular Party in this city, our city, are willing to work hard to achieve it.

We take advantage of these lines to congratulate you on the New Year and wish you all that our little problems, those of the day to day, are solved once and for all.

37.861
4.451
12.913
2.430
We use cookies necessary for navigation and traffic analysis. We do not use cookies that provide us with personal data or advertising cookies.
More optionsACCEPT
Manage consents