Ohcielos.com, a new furniture store online 100% of the region

Despite the complicated economic situation that plagues our country daily, the e-commerce sector continues to grow exponentially. So much so, that Spanish SMEs that partially or exclusively sell their products online, have experienced in the last year a growth of 6% in their online billing. Not in vain, online sales is a great way to generate additional income for traditional merchants, as well as an interesting business opportunity for entrepreneurs who want to open a trade without having a physical store.

On the other hand, the development of new technologies - especially mobile devices such as smartphones or tablets - along with the appearance of multiple and secure forms of payment (credit card, bank transfer, Paypal, cash on delivery, etc.) In the appearance of a new model of customer formed in the environment 3.0, which increasingly more often compares prices, requests opinions and makes their purchases comfortably through the internet. 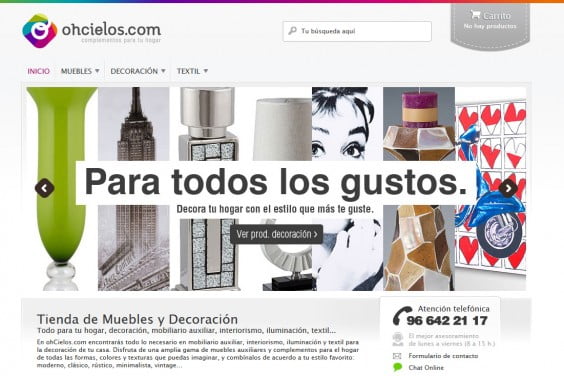 The Marina Alta does not remain unrelated to this tendency, which has caused that the number of electronic commerce existing in the region is multiplied. One of the responsible for this is the company delaweb, located in La Xara and composed of seven people from Denia, Xàbia And Pedreguer. Today, after accumulating twelve experience in the development of websites and online stores, its components have decided to venture into the launch of a new and ambitious project of its own. Is about Ohcielos.com, An original e-commerce of furnishings and decoration complements that is receiving a great reception by the internaut community. The fresh and carefree personality of the website, its ease of purchase and its wide variety of articles are the keys to the success of a project that, despite marching just a few weeks, is already giving much to talk in the forums. Sector and social networks.

Ohcielos.com Is one of the best examples of the spirit of improvement of the entrepreneurs of our region, who have bet strongly by the adaptation of their businesses to this new era.