New win for Andrea Fernández to win the Triathlon Alicante

Andrea Fernández Castelló, triathlete Multiesport Marina Alta, was the winner of the Triathlon Supersprint Alicante in the distance. This test is the second Triwhite Cup Circuit 2013. A victory that allows him to continue as leader of this circuit consisting of six races which so far have played two, with triumph of Dianense.

The test was held at the modern beach promenade of San Juan, where he remained located the bike box and Circuit footrace sector. The swim being held on the beach, while the cycling was played by large and clear avenues surrounding this coastal town.

The test began at 8`30 morning, with the use of wetsuits by low temperature seawater. The distance had to swim was 350 meters. The output came from the sand of the beach, having to to swim to a buoy and back to shore. Andrea used a time 6 57 minutes and seconds.

The cycling segment consisted of a route of 10 kilometers and the dianense used a time of 20`33 ". The last sector of foot race had a distance of 2.500 meters, for which Andrea marked a time of 9` 19 ", getting the best time in the three segments, among the participating women.

The test ended Dianense ranking twelfth in the overall standings with a total of 84 participants. The next appointment for her, will be this Saturday at the Triathlon Puzol, where the Multiesport Marina Alta will have a broad representation being a scoring event for the regional championship and also for the National Championship Series triathlon Spain Cadete category. Andrea ranks third in the standings in this event which will have to be measured at the best triathletes in the country. 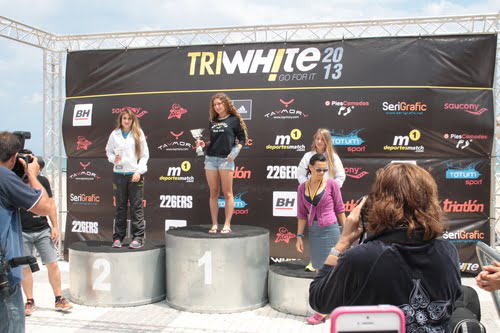