June 23, night of San Juan. Here in Dénia, the beaches They will be filled with people who, at 00 hours, and after having shared the night on the beach with their friends and family, will enter the sea to fulfill the tradition.

The celebration of this date back centuries, since the Greeks believed that the period of the summer solstice was the period when the doors opened "on the other side of the mirror", Time of contact with ancient mysteries, spirits, elves or hidden desires.

It is also a party linked to the fire, a fire that celebrates the arrival of summer and whose function was to give more power to the sun, which at this time has reached its peak.

So tonight beaches not only of Denia and the region, but throughout the country, will celebrate the feast of San Juan with thousands of people on the sand preparing desires they want to ask tonight, they burn what they want you to go of his life and throw them into the sea ensure that your wishes are followed. 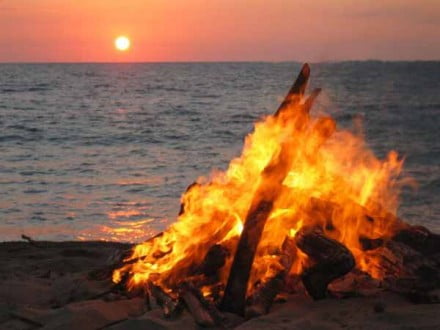 Some rituals that you can tonight

San Juan night is a perfect night to mark the start of new personal goals, which can start at least with the intention that some rituals of this magical night will help in the process.

Did you know that they say that if you jump the bonfire during this night you ensure protection throughout the year? Of course, what varies is the number of times you have to skip it ... Seven, the magic number, seems to be the favorite in our area.

But not only the fire water is also an essential element tonight. Legend has it that plunge into the sea on the night of San Juan guarantees health for the whole year. As they say, do it twelve times back and looking at the moon. But if you're not too busy to immerse yourself completely, do not forget to jump the waves. The number of times varies depending on what you want: if you jump back nine waves, increases fertility; and if seven waves, you eliminate the negative energies.

Finding love, solving health problems, everything related to work and money ... thousands of wishes, each one adapted to the needs of its owners, will float tonight on the beaches and burn in the fires, making June 23 the most magical night of the year.

And you, did you order yours?