'Dénia Corre' is born, the unification of the Dénia teams that will participate in the Circuit a Peu to the Marina Alta 2019

The phenomenon of popular races that has been taking place in recent years has been an attraction for thousands of people to start practicing sports or to build loyalty to runners or other sports. 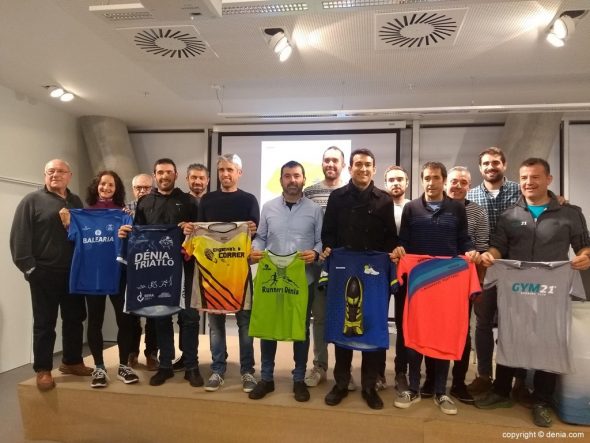 Specifically in Dénia, with the proximity of the Circuit to Peu Marina Alta, this phenomenon has increased, both in the number of people practicing as in clubs, groups or groups of friends created for that purpose.

In order to unify the identity of the dianenses runners, the project was born Dénia Run, which unifies all the teams of the city under the same name and colors for the start of the Cicuit to Peu 2019.

It is about 250 runners belonging to the Runner Dénia teams, Gin Running, BernardosTrotters, Enganxa't a Correr, Club Atletisme Diànium, Dénia Triatló, Gym21 and Independientes, who will wear the yellow shirts with blue logo with the city coat of arms throughout the circuit.

Marc Banyul, on behalf of the clubs that make up the project, defines Dénia Corre as a social and sports movement, open to all types of groups and people, with sporting ambition, great enthusiasm and which they are sure will be discussed during the next Circuit .

The presentation of Dénia Corre was held this Wednesday afternoon in The House of Paraula de Baleària Port. Along with the clubs that comprise it have been the sports councilor, Vicent Crespo, and the manager of the Fundació Baleària, Ricard Pérez. Both have agreed on the importance of a project like this to give visibility to the city of Dénia and to give the opportunity to those who run as independent to participate under the umbrella of the same project.

Dénia Corre is open to new runners. Those interested can contact them through the mail deniacorre2019@gmail.com facing the Circuit to Peu to Marina Alta 2019.