Silver medals for Pérez and Pous, and bronze for Aina Fornés at the Autonomous Absolute on indoor track

Brilliant was the performance of athletes Joan Pérez, Juanra Pous and Aina Fornés, of the Athletics Club Baleària Diànium, in the Absolute Autonomous Indoor Track Championship that took place at the “Lluis Puig” velodrome in València. The three returned home with medals, the first two silver and Aina the bronze. 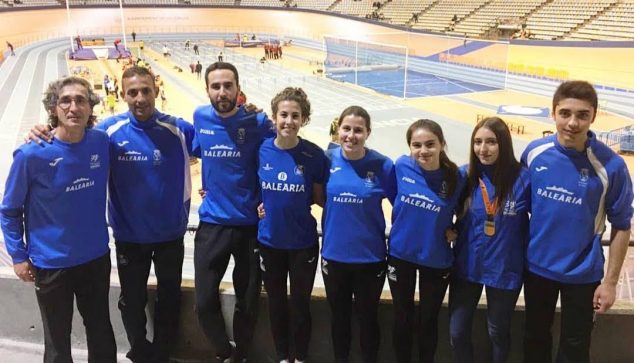 Athletes of the CA Baleària Diànium at the Autonomous Absolute

In this event were the best Valencian athletes of each of the tests of all categories.

Joan Pérez, started the competition winning his semifinal, getting his best mark of the season with a 7.04. In this way he achieved his direct classification for the final. A race that was very close in which the Dianense made a mark of 7.05, only surpassed by Pablo Mirete of the CA Fent Camí Mislata that ended in 7.02.

While Aina Fornés disputed the semifinal of the 60 meters hurdles getting to be second, and the direct classification for the final. His time in the semifinals was 9.01, which means he stayed at 2 hundredths of the minimum to be in the Absolute Spanish Championship. In the final Aina was third, with a mark of 9.15, behind the winner that was Sanae Zouine, who made a time of 8.75, and the second classified was Clara Senis, with a mark of 9.01.

In men, Joan Puigcerver, in the 800 meters was tenth with a time of 2.02.29, Youssef Ahatach, finished in tenth place of 1.500 with a mark of 4.09.69, and who had bad luck was Moha Rida, who noticed some discomfort when he disputed the 3.000 race and chose to retire so as not to aggravate the injury.

In the morning, in this same scenario, the Sub 12 Interprovincial Championship took place, a team competition between provinces, where a selection of the two best in each province is made in each event.

The Dianense club was represented by Iván Delgado who was part of the Alicante team in the test of the 60 meters hurdles, as provincial champion he is. Ivan ran with another athlete from Alicante against the two best in Castellón, Valencia and Murcia.

Ivan played a great role for the team despite being the smallest of the participants, he won the race getting a great record with 10.48 contributing the maximum possible points to the Alicante team. In addition, he also ran the 4X200 relay making the first post, delivering the relay in the second position. The Alicante team finished in the fourth place of this Interprovincial with a total of 59 points.